There is a moving, beautifully-filmed story about a handsome young German girl struggling for her life, and to come of age, through an unlikely bond with a young Jewish refugee during the death throes of the Third Reich. This isn’t it.

That film is Cate Shortland’s remarkable Lore (2012), and if you haven’t seen it, you should.

About this film, which also concerns an orphaned German girl coming of age through a relationship with a young Jewish refugee in the dying days of the Reich, I’m not so sure. Director Brian Percival – he of Downton Abbey – paints by numbers, and his scriptwriter Michael Petroni has a tin ear for dialogue.

The opening aerial shot, swooping in over a layer of cloud, is trite enough to be a studio logo animation. As we dive through the cloud to track a steam train puffing excitedly through snow-bound countryside, one could be forgiven for deducing a Harry Potter instalment. But no: Roger Allam’s mellifluous baritone fills the soundstage and we are underway. Allam is the unseen voice of Death, and he intercedes periodically through the two and a quarter hours of this film to tell slow witted viewers what is going on.

Yet Allam’s dialogue is aspirationally coherent and not actually meaningful. If you let his velvet gravel, John Williams’ lachrymose music and Florian Ballhaus’ luscious images do their work, you may switch off altogether and still get the gist. 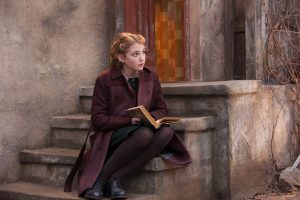 The gist comes through loud and clear elsewhere: 10 year-old Liesl, (Sophie Nélisse) has been orphaned and comes to live with Hans (Geoffrey Rush) and Rosa (Emily Watson), of whom Hans is warm and kind, and Rosa cold, practical, and interested only in the money she will earn from fostering. They wind up sheltering handsome young Jewish refugee Max (Ben Schnetzer), and everything else proceeds exactly as you would expect had you any experience with this sort of story (The Diary of Anne Frank, Schindler’s List, and so on), only without any edge or challenge to expectations. Petroni’s awful dialogue affords the cast no scope to practice their craft and the viewer no need to practice inference. Instead, through wholly artificial dialogue delivered in cod German accents, which lapse for easy words into actual German (nein, ich bin nacht kidding) the screenplay beats us over the head with every plot development.

The actors, accordingly, flounder. Rush is as good a character actor as you’ll find these days, and he works a small miracle breathing life into Hans. Watson singularly fails to animate Rosa, and with their tender years the two child leads, Nélisse, and Rudi (the exceedingly Aryan-looking Nico Liersch) have no chance. Nélisse is an engaging personality, and may go far, but at 11 she was a few years young for this to generate the sort of vertiginous pubescent tension of Lore: Hannelore (15, but played by 18 year-old Saskia Rosendahl) is truculent, nuanced, vulnerable and organic. Liesl is (by necessity) wide-eyed and saccharine, though she does give one of her classmates a good kicking early on.

Thereafter the screenplay pulls punches it should have thrown heartily: despite being threatened, Liesl’s basement secret is never discovered. Nor is her book-thievery. Max is not captured. Despite being selected and threatening to run away, Rudy never gets sent to military training, and while Hans does get conscripted, before long he’s home again nursing nothing more than a limp and percussion deafness in one ear. A book burning is portrayed rather like a glum Guy Fawkes’ night. Even Kristallnacht is sanitised. Max reaches death’s door from fever a couple of times but, after some mawkish scenes, is turned away each time.

These missed beats mean the long middle of the film stumbles around like a blind man in a dark room in search of an exit, but who keeps walking into cupboards. Eventually he finds his way out, courtesy of a ten-ton weight unprompted by any of the dramatic devices or character arcs that have been carefully established, but by this stage – over two hours in – my patience and forbearance had long since been exhausted. 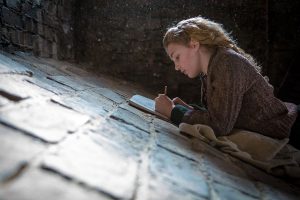