How times change, eh. Every time I see Gordon Kennedy I still think of him as part of the panel debating how to boost the appeal of Stoneybridge in Absolutely. He has been doing solid work for years, but he would always be one of the Stoneybridge council to me. Well, that may change now after his fantastic turn in this UK horror movie.

Yes, it’s yet another “found footage” horror movie, but let me start this review by assuring folks that this is a damn fine example of how to use the format properly. The simple premise sees a trio of men (Deacon, played by Kennedy, Mark, played by Aidan McArdle, and a tech/sound guy named Gray, played by Robin Hill) investigating supposed paranormal activity at a church in a small village. The local priest (Luke Neal) is convinced that he’s witnessed some kind of miracle, but Deacon and Mark are sceptical after spending so much time uncovering fakery (both natural and man-made). Gray is new to this kind of thing, so he’s a bit more open-minded about the whole thing.

Yes, it’s a bit like Paranormal Activity in a church, if you want to be lazy about it, but this is a much better horror film, overall. Writer-director Elliot Goldner paces things perfectly, which is something that so many other directors working in this format forget. It’s easy to wring tension and scares from “found footage” but it’s something easy to misjudge. I’m sure that everyone reading this can think of at least one such horror movie with nothing happening for 70-80 minutes before a finale that fails to make up for the preceding boredom. That’s not the case here. This is a very good horror movie, period. 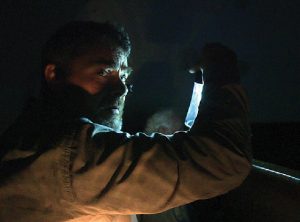 Kennedy is solid in his role, a man who has seen more than he’d like to admit, while Hill is the more light-hearted presence for most of the movie. The two are the heart of the movie, and the way in which they work together helps in no small part to make the thing a success. There are times when the banter feels a bit false, but the relationship never does. They don’t become instant bosom buddies, but they do warm to one another, and they do try to look out for one another during the investigation. McArdle comes along slightly later, and he’s the person who wants everything done by the book. He’s also the person who seems the most stubborn when things start to happen that are harder to explain, making it a tougher role, but McArdle is good in the part. Neal is also good as the priest who finds himself viewed with suspicion by the investigators, and Patrick Godfrey does well with his small, but vital, role in the third act.

Those who hate shaky-cam should be warned that there are a few scenes featuring that particular irritation, but those scenes ratchet up the tension so nicely that I was able to ignore the jittery moments. Which is as it should be. Even a few of the jump scares were either fakes that were so well executed I was then able to laugh at my nerves in the immediate aftermath, or just additional nerve-fraying on top of some oppressive atmosphere and a sense of foreboding.

It doesn’t reinvent the wheel, but it does provide a perfect example of how to make a horror movie of this kind. Keep it simple, intersperse the narrative with good scares and foreshadowing, have the characters be likable (for the most part), and just don’t treat the audience like idiots. Are there a few minor niggles here and there? Yes, but none that bothered me enough to distract from the experience of watching most of the film from the edge of my seat.

The Borderlands has a limited UK cinema release this weekend, as part of the Our Screen initiative (more on that here). Do go along to catch ift if you’re near to any of the following: Edinburgh Cameo- 28th March, Liverpool Fact – 28th March, Norwich Cinema City – 28th March, Hackney Picturehouse – 28th March, Brixton Ritzy – 28th March, and Brighton Komedia – 3rd April