They say a picture tells a thousand words, so really this review should be a picture of my face as the credits rolled on The Boxtrolls. However, I don’t know how acceptable that would be to my editor, or the readers, so around a thousand words will have to do. The third feature film from Laika, the animation studio responsible for Coraline and ParaNorman (the best film of 2012), is another absolute joy. Set in a cheese-obsessed Edwardian town, it follows Eggs (Isaac Hempstead Wright) as he tries to save his trash collecting boxtroll friends from Archibald Snatcher (Ben Kingsley) and his three hapless henchmen.

Laika don’t make cute films. Their films are creepy, sometimes grotesque and always gorgeously animated. The Boxtrolls is another perfect example for this with oddly shaped humans and a fairly nasty scene which didn’t go down very well with some of the younger children in the audience, but then this isn’t a film for younger children. It’s refreshing to see an animated film that isn’t all sweetness and light, particularly in the one scene that’s quite alarming, even for an adult. Archibald Snatcher is really quite a grotesque character who gets greasier and grosser as the film marches on. His hair, reaction to cheese and voice are nasty and show Laika to be the alternative studio they are, since the only remotely cute thing in the film is Fish, Eggs’ adoptive boxtroll. As always, the stop-motion animation is second to none and the film has some lovely scenes, including one involving Egg above ground at a party, trying to fit in with handshakes and waltzing. The boxtrolls’ cavern is a masterpiece and their method of getting themselves around is a stroke of animating genius. All in all, despite not being the most beautiful film to look at, it’s so well animated and innovative that it’s hard not to be dazzled. 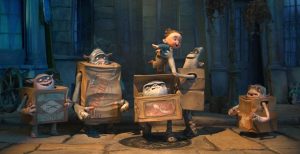 With The Boxtrolls, Laika have proven they are going from strength to strength. Any film following ParaNorman was going to be tricky, but Laika has given us another cinematic treat whilst showing they’re evolving with every step they make. The Boxtrolls is a funny, touching and brilliantly put together film which proves Laika to be the best animation studio working, and may they keep doing so for many years. Finally, stay and watch the credits for a post-credit sting that outdoes their brilliant ParaNorman sting.

The Boxtrolls is in cinemas 12th September 2014.

Hidden Horror: A Celebration of 101 Underrated and Overlooked Fright Flicks