I can’t remember who it was, it may have been director Terry Gilliam himself or it may have been written in a review I read a long time ago, but I always remember someone describing Brazil as “the best adaptation of 1984 that isn’t called 1984.”

Brazil remains Gilliam’s finest hour, despite some strong competition from a few of his other movies. The main story mixes Orwellian themes with the surrealist nightmares of Kafka to provide audiences with a pitch black comedy that also tapdances very close to real horror at times.

Jonathan Pryce is Sam Lowry, a man discontented with the world around him, a heavily-monitored, near-future world that’s made up of equal parts fear and bureaucracy. He tries to just keep his head down and get through life, escaping the boredom around him by escaping into some vivid dreams, but a chain of events is sparked off when he is asked to correct an administrative error. While the government tried to capture a threatening activist named Tuttle (Robert De Niro) they ended up, instead, capturing an innocent man named Buttle. And accidentally killing him.
As one character says: “It’s not my fault that Buttle’s heart condition didn’t appear on Tuttle’s file!”
And it’s that kind of attitude that’s at the heart of Brazil, the kind of obliviousness to so many things that people should know are just plain wrong. 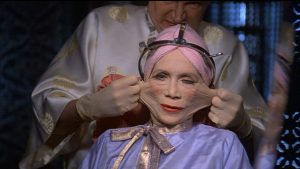 With a cast of performers all fitting perfectly into their characters, across the board, a great script (written by Gilliam with Tom Stoppard and Charles McKeown) and wonderful visual style and design filling every frame, this is just about the best piece of entertaining cinema you can get, despite the fact that it’s also almost unrelentingly bleak.

Pryce is especially good in the lead role, very much an everyman with just enough of a sense of right and wrong to get himself into big trouble, while Kim Greist is suitably feisty and strong as the woman who becomes the object of his affection (though she’s also the weakest of the main players). Katherine Helmond is deliciously self-centred and cold as Sam’s mother, while De Niro has great fun with his role, which amounts to little more than an extended cameo, even if his character casts a big shadow over the proceedings. Elsewhere, Ian Holm, Bob Hoskins, Ian Richardson, Peter Vaughan and Jim Broadbent do great work, while Michael Palin almost steals the entire movie with his chilling performance.

Almost as well-remembered for its troubled journey to cinema screens (with most of the contention focusing, and rightly so, on a horrible happy ending that was put together, and on the running battle between Gilliam and Sid Sheinberg), Brazil is a film that movie fans should be happy can now be seen as Gilliam always intended. It’s not a comfortable viewing experience, with many of the  elements scarily close to some of our modern problems with governments and bureaucracies (as is the case with anything Orwellian nowadays), but it somehow puts everything together in a package that will keep you entertained, make you think and make you laugh, even if those laughs come from an uncomfortably dark place.

Everyone should see Brazil at least once, if only to ensure that the world that we live in doesn’t completely turn into the one depicted in this movie.