Among the most polarizing directors in contemporary world cinema, Bruno Dumont has finally found the material to complement his singularly obdurate aesthetic and editorial style, a manner of studied austerity which has previously felt sycophantically disposed to the arthouse front row. But Camille Claudel 1915 is a story of imposed austerity for the titular sculptor (played with etiolated severity by Juliette Binoche), who lived out her last thirty years at Montdevergues Asylum, and Dumont’s house style proves a perfectly tailored misery canvas for her tribulation.

Camille was committed to an institution in 1913 following claims that her husband Auguste Rodin had tried to kill her. It was at the instruction of her brother, the poet Paul Claudel, that she was first housed at the Ville-Évrard; her relocation to Montdevergues was forced by the onset of WWI. She sent regular correspondence to Paul during her first three years there, and it is his impending visit which forms the dramatic crux of Dumont’s film.

It’s initially jarring to observe Dumont’s casting of mentally disabled, mainly down syndrome non-actors to play the inmates, and his agonizing protraction of one sequence where a patient bangs her spoon against a table can’t help but recall the stripe of provocation in his early films – my mind was cast back to the nasty about-face of Twentynine Palms, a shameless and cruel reversal of empathy which almost put me off his work for life. 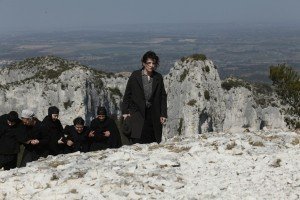 Thankfully Dumont retreats from such base tactics, employing his calculated pacing and rhythmic shot structure to build a deep and lasting sense of environment, empathizing with the patients rather than reducing them to some Freaks-esque sideshow or mere set-dressing. These are fully-rounded and likable characters, and Camille’s frustration in her encounters with them encourages us to question her mentality and temperament.

But it’s in this sense that Dumont’s casting is perfect. Some may find it in bad taste, but by setting Binoche in tableau against an ensemble of disabled actors he finds a way to visualize Camille’s detachment from her environment – as the only patient without some kind of physical deformity or vocal impediment, her inability to communicate with or relate to anybody in her immediate surroundings serves as an intensifier of her plight.

Yet Camille’s waning tolerance toward her fellow residents is exacerbated by the dour nature of her own closed-quarters, and an early scene where two patients stage a scene from Don Juan, and Dumont cross-cuts between the performers (both brilliant) and her horror at how this well-intentioned act of play falls into skin-crawling, albeit inadvertent bullying, reminds us that she too is capable of empathy. 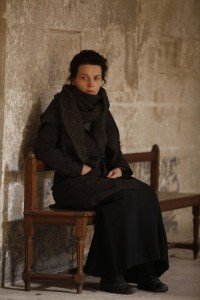 Camille’s seesawing emotions often result in verbal outbursts against the other patients, and it’s this complex oscillation of our sympathies between her and them – however manipulated by the casting – which makes Dumont’s drama so great.

Camille’s subjugation by her doctors is subtle (“This is female exploitation! They want me to sweat blood!“), and gradually suggestive of what we fear all along – that her confinement is now the defining contributor to a clearly fracturing mental state. Unable to sculpt or draw, she is left to concentrate her energies on the most strained areas of her psyche, notably her fear of being poisoned (it’s a cruel irony of her existence that mealtimes are the only certain punctuator of daily routine), and suddenly we are witness to an irrevocable miscarriage of science, Camille’s condition worsening under the guidance of her therapists.

Dumont acknowledges the failure of early diagnoses of insanity (another factor which makes the casting of disabled actors so canny) and marries them to the misplaced belief that faith can ease the patients pain – that he forces us to live in hermetic isolation with these characters, who are going without proper medical care or understanding, is what make his evocation of a landscape without hope so wrenching and unforgettable; better yet, his usual dalliance with religion is more thoughtful and less abrasive than ever before. 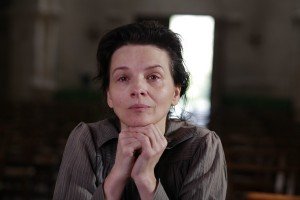 If the film stumbles, it’s during a third act diversion which adopts Paul’s (Jean-Luc Vincent) point of view, reciting in voiceover his response to Camille’s plea for freedom. It’s not that the scene is bad – though it bluntly addresses Paul’s understanding of his sister’s condition, which Vincent capably suggests in their final confrontation, making it no less than an exercise in redundancy – but rather that it breaks the film’s culminative rhythm and tone. Dumont has worked so hard to build a sense of solitude and emotional captivity for Camille that the leap to an exterior location, which assumes the perspective of a character whose opinion is probably better withheld, is just too dissonant.

But it’s a slight misstep before the heartbreaking denouement, where Binoche’s performance – an arid, frail and anguished portrait of a woman under emotional duress – comes into its own, and her third monologue before camera digs so deep that it rattles the bones. Perhaps without that minor digression, Camille Claudel 1915 could have been a masterpiece (perhaps a second viewing will reveal it to be), but for now I’m content to recommend it as the best Dumont film to date – a sparse and harrowing drama featuring a career best turn from Juliette Binoche.