Newly deployed to the eponymous Guantanamo base, Peter Sattler’s debut follows Pvt. Amy Cole (Kristen Stewart) as she navigates the patriarchal milieu of a military prison, and finds an unlikely companion in Ali (Peyman Moaadi), a talkative detainee incarcerated at the Delta for eight years.

Opening with the Northern tower discharging thick billows of smoke on the morning of September 11th, the camera slowly zooms out from this iconic image and reveals it to be televised. It’s a shot which neatly encapsulates Sattler’s propensity for reenforcing neutrality, and whenever possible withdrawing from scenarios which demand a point of view from his cooly impartial eye.

The most poignant cinematic reflections on 9/11 have been spiritual rather than literal – 25th Hour (2002), Gerry (2002) and Margaret (2011) – but continuing a long line of films which ostensibly engage with the attack, the ensuing Iraq war and crimes perpetrated therein, Camp X-Ray reveals itself to be whimperingly apolitical. Even the exalted Zero Dark Thirty (2011) puts its HBO-ready aesthetic and thriller structure before mounting any sort of polemic, blinking at its subject when it should be adopting a fixed stare, and Camp X-Ray has its eyes permanently closed to the grey zones of a multi-coloured conflict.

Sattler exposes his simplified understanding of the tensions between Arabic detainees and US soldiers through his westernizing of Ali, who is written as a University educated German national, with a fluent English tongue. The artistic motivation here is insulting (American audiences don’t want to read subtitles), but politically it wreaks havoc. Juxtaposed with his fellow inmates, all caricatured jihads screaming in angry (unsubtitled) Arabic, Ali appears almost American, and fawning close-ups on his sad eyes reduce the Harry Potter fanboy (incredulously, twenty minutes of conversation and a saccharine coda revolve around the J.K. Rowling franchise) to an ethnically neutral, calculated empathy machine. 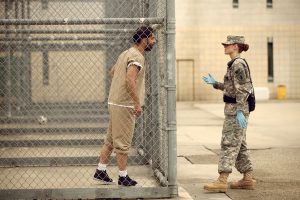 Inevitably, some will claim that this is exactly Sattler’s point about the military’s all-brown-faces-are-the-same prejudice, but I call bullshit on a film which takes that stance against every other Arab who isn’t Ali – the detainees who exist out of sight and out of mind, barely glancing through their cell door windows, for much of its duration. Acquitted of any potential war crimes by the twee character traits he acquires in the film’s first act, Ali comes frighteningly close to the stock Magical Negro, there to help the white protagonist’s discovery that her environment is more complicated than it first appears. But the film’s uplifting agenda means that Camp X-Ray itself doesn’t come close to expressing the true nature of this complexity, and had Cole’s friendship with Ali needed to be processed through the moral murk of his possible involvement with the mujahideen, and his defence harder to mount through a language barrier which seems to affect every other inmate on base, shifting allegiances would have implicated and engaged the audience in the drama.

Ali and Cole’s exchanges are prosaically written, but dynamically shaded compared to her interactions with other soldiers (“fuckin’ detainees, what’s their problem man?“). The film’s saving grace is Moaadi (best known for A Separation), who brings subtlety wherever possible to a paradoxically over (his incredulous dialogue is all a microcosm) and under-written (we never learn anything valuable about his past life and family) role. His is a fantastic, powerfully human realisation of at best a stock character, and at worst a message in sheep’s clothing. Stewart falls back on her usual lip-biting, hair-tucking ticks, playing a taciturn character who asserts her personality with forced physical confidence, and with a military cap covering the top half of her face, most of the emphasis for emotional communication is directed toward her jaw. In every scene she finds a more confident performer to square off against and pale beside, and in his brief role as a Commanding Officer, John Carroll Lynch is a standout.

Finally the film falls victim to itself, and if its title implies an under the skin investigation into the political anatomy of military prison, the metaphoric potential of Camp X-Ray is lost on Sattler, whose portrait of the titular facility is affected by a sinew-free transparency. Not for the fact that his vague indignation lacks any focus, but because he has somehow weaved the condemnation of military activity into an easily accessible, inspiring narrative, it’s hard to imagine how Camp X-Ray won the acclaim it did out of Sundance. But for those same reasons, it’s all too easy to see why it’s about to hitch on the road to Oscar success.