Paul Schrader and Bret Easton Ellis’ collaboration has got everybody talking at Venice, but not necessarily for the right reasons.

Christian (James Deen) is a trust fund LA kid who’s dabbled in being a film ‘director’ but his main passion seems to be having sex with strangers along with his live-in girlfriend Tara (Lindsay Lohan). But when Christian suspects his beloved Tara may be having an affair with the lead, Ryan (Nolan Funk), of his latest film project, Christian decides to take matters into his own hands.

I have never seen the television series The Hills, but I imagine if an exaggerated film version were made of it (and there were no consequences to murder) then this would be the result, and incidentally the tagline for this film is ‘It’s not the hills’. The Canyons has the aesthetic of a TV movie and the dialogue of a soap opera. It is never self-reflexive or knowing in its approach and the characters have absolutely no depth whatsoever. Of course, if you listen to author Bret Easton Ellis then this is all intentional and the film is “a cold dead film about cold, dead people” but unfortunately the film is just too awful to even begin to understand this artistic ‘experiment’. 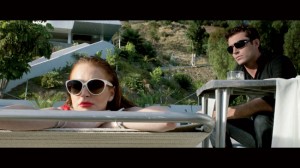 The fact that the two main stars in the film are adult film star James Deen and Lindsay Lohan, plus the fact that it has a big name director and writer behind it, has meant that the film has garnered a lot more attention than it actually deserves. Easton Ellis stated that “we knew we were going to take a lot of flak from critics … who want more humanistic characters” and the film has indeed received a lot of criticism in the States. My issue is not the fact that the main characters are not humanistic, but rather that the film is dull, unoriginal and boring.

Easton Ellis discussed how he was interested in reinventing noir characters and exploring people that wear masks all the time in this film and perhaps if these characters had an ounce of charisma, or something about them, the film would have been more engaging. Surprisingly Lindsay Lohan’s acting is not the worst thing about this film and she actually does a decent job in an uninspiring role.

Visually it is a rather ugly film, and the lack of budget is really no excuse for this. The harsh daylight of Los Angeles has been utilised but not to great effect and shot compositions seem poorly considered. The sex scenes were also uninspired and were neither seductive nor provocative and actually were rather dull. Easton Ellis defended the film at the press conference saying that it was made with absolutely no money and was an experiment and the film had been “widely criticised and attacked (by critics), without going out of their way to find out the background of it”. 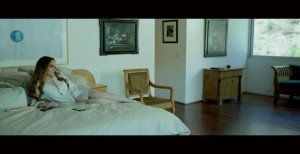 On the positive side the music was interesting, dark electronic beats are reminiscent of the brilliant Drive soundtrack and the still images of derelict and closed cinemas at the beginning and end of the film are beautiful and the most thought-provoking element of the film.

Unfortunately The Canyons is not trash cinema, extremely popular and well executed at the moment with the release earlier this year of Harmony Korine’s Spring breakers and The Paperboy, which both demonstrate how it should be done. A film about vacuous mask wearing people unfortunately needs to have more to it than that and with Paul Schrader as director it is disappointing to see he is practically not present in the film at all.

I can see where Easton Ellis is coming from but there really is nothing engaging about this film, nothing aesthetically pleasing and it is just a clumsy rehash of clichés and unoriginal ideas. There was laughter in the press screening for this film and it is not a comedy. When one critic asked Easton Ellis what he thought of this he replied that the reaction of laughter is not a surprise. One can’t help but wonder why make a film if you are so aware of how awful it is, or perhaps the last laugh is on them?