This is director Emma Dante’s debut on the big screen, previously she has worked in theatre, and it is an extremely promising start to her film career.

The majority of the film takes place in the titular Italian street, where two cars coming from opposite directions block each other passing in a tiny street, each passenger refusing to back down and reverse to let the other car pass. What starts as silly stubbornness transforms into full blown obstinacy and no one can predict how this will end.

The first car contains Clara (Alba Rohrwacher) and Rosa (Emma Dante), a bickering couple on their way to a friend’s wedding, but being back in the area is not to Rosa’s liking and has put her in an instant bad mood. The other car is driven by elderly, grieving and notoriously stalwart Samira (Elena Cotta) and her family in-laws. Both drivers are determined to not back down but as more people begin to get involved things get out of control. 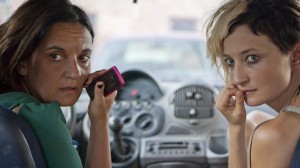 Via Castellana Bandiera opens with an underwater shot, just below the surface, a metaphor for one of the themes of the film, things trapped and bubbling just below the surface, desperate to escape; Rosa from this place that brings back memories she would rather not deal with, Samira’s grief and the Calafiore family trapped in a small town and stuck in their ways, particularly grandpa. There is also a sense of claustrophobia, especially when the two women are stuck in their cars, Samira literally locking herself in in the extreme heat. Actress Alba Rohrwacher has also stated that the obstinacy of the characters represents the obstinacy of a whole country, proving there is far more to this than may first appear. 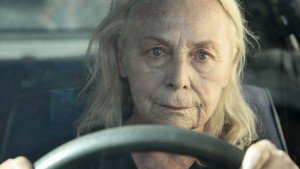 Beautiful, striking shots, such as an aerial shot of the old woman lying on a gravestone surrounded by dogs, set this comedy drama apart, and its simplicity really is its strength. The script is extremely well-written, by Emma Dante as well, and she comes across a little like an Italian, more mature Lena Dunham. There is humour and plenty of it but there are also serious undertones and the multitude of characters ensures there is plenty to be fascinated with in this film.

There is plenty of attention to detail as well, be it the recurring back of the head shots of the old woman, the clever character development; grandpa does what he likes, his house is number 5 even though there already is a number 5 on Via Castellana Bandiera, or the extreme close ups. As the two women get out of their cars, the camera focuses on them, depicting them as if they were two cowboys in a Western. As with all good comedy, it is very much down to the timing and Dante proves she can really do this well. Some of the humour is nicely subtle whereas the pure stubbornness of the characters leads to such a ridiculous situation that it does move into the farcical, but that makes it all the more amusing. 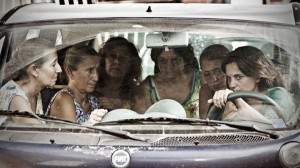 Dante really considers how to use the camera for great effect and the static camera in the end shot is a nice touch, but, like the characters, it is pushed to the limit. The acting is spot on, with strong male and female performances and I will look forward to future films from Dante.

Overall, a well scripted, well cast, enjoyable comedy drama with just enough depth and a nice touch of the ridiculous too. Bravo.