Black comedies are a tricky genre to master, mainly because you don’t know whether to be entertained or sickened by what enfolds.  The dark debut of E.L. Katz has a very simple story, but it is so deliciously twisted as it makes you ask the question: what would you do for extra cash?

Cheap Thrills sees newly unemployed Craig (Pat Healy), who is facing eviction from his flat.  Bumping into an old friend, Vince (Ethan Embry), they begin to reminisce about the past.  The evening becomes interesting when they meet the gregarious Colin (David Koechner) and his young, attractive wife Violet (Sara Paxton), who willingly pay them to complete various dares.  But as the night progresses, the ‘prize money’ goes up, as well as the violence of the dares. 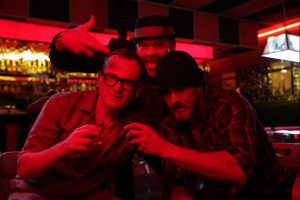 The idea of doing whatever it takes to survive financially is the key that drives the film, as Craig and Vince shrugs off ethics for the sake of money.  They are essentially manipulated by their own personal greed by Colin and Violet, who seemingly don’t take any personal pleasure from being the puppeteers.  The dares themselves become quite horrific and awkward to watch and as the characters’ hesitation dissipates, their personal motivations become unclear.  Do they want to win for the money or to gain favour with Colin and Violet?  Who knows.

The film starts off pretty tame and predictable, but when the couple strays the pair into uncomfortable territory, the story and the concept comes alive.  E.L. Katz’s direction becomes increasingly tense and constrained, Trent Haaga and David Chirchirillo’s script grows insane and Healy and Embry effectively play against each other as they gradually degrade and mutilate themselves.  Better known as Anchorman’s bat-shit crazy Champ Kind, Koechner takes a calmer yet sinister approach to the unbalanced Colin, giving a memorable performance.

Cheap Thrills is clever, disturbing and eyebrow raising, but in terms of story, it is anything but cheap.

Cheap Thrills is out in UK cinemas on Friday 6th June.