While it’s the kind of thing that we’ve seen a hundred times before, Chocolate Strawberry Vanilla is an impressive film, thanks in no small part to a fantastic central performance from Glenn Maynard, onscreen for almost every scene as hapless ice cream vendor, Warren Thompson.

Warren spends his days asking people whether they want their ice cream in a cup or a cone, avoiding glares from the nasty pimp who stands across the road from his main spot, and then heading home to watch his favourite soap starlet (Katie George, played by Kyrie Capri). His life seems to take a turn for the better when Katie turns up at his ice cream van one day, but can Warren keep his cool while interacting with the woman he’s so madly in love with? 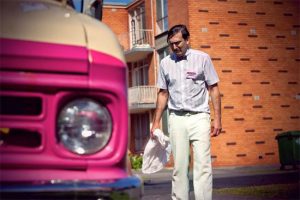 Weaving between moments of pitch-black comedy and surprisingly affecting drama, Chocolate Strawberry Vanilla is a character study that takes viewers along for a ride in an ice cream van just as full of turbulent emotions and potential anger as it is full of ice cream. Warren is a sweet guy, but he’s also full of frustration and rage. And those feelings are justified, considering some of the people that he has to put up with in his life.

Director Stuart Simpson, working with a very good script from Addison Heath, doesn’t rush anything. He has great faith in his main star, and that faith is rewarded tenfold throughout the movie. Whether he’s talking directly to his new video diary, dealing with a confrontational pimp, or cutting pictures out of magazines to help create a mobile mini-shrine to Katie, Maynard is never less than riveting for every minute. 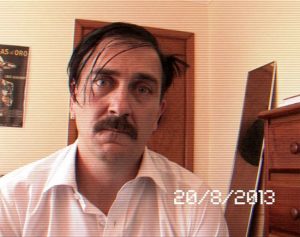 The other cast members are no slouches, however, with Capri being very easy to like as the object of Warren’s obsession, and Aston Elliot being very easy to dislike as the aggressive pimp who sometimes pops over to demand an ice cream that he has no intention of paying for. They may be the main characters, but there are plenty of other people onscreen, with some cast members getting to have a lot of fun in the fictional soap – “Round The Block” – that Warren watches religiously.

In fact, that’s the other plus point of the movie. As well as moving effectively between different tones, it also manages to keep things based in a slightly heightened reality that will amuse viewers while never feeling too absurd. The credit listings for “Round The Block” may be full of names to make you laugh aloud, but the actual content of the soap is all too easy to believe in, if you’ve ever seen Neighbours or Home & Away (ummmm . . . . . . I know because, well, I accidentally watched it one time, yeah, total accident). 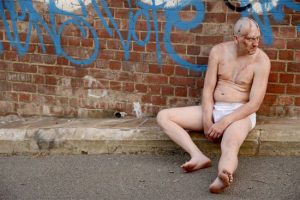 I really liked this movie, despite slight disappointment in the very final scene, and I encourage others to check it out whenever the chance arises. It doesn’t try to change the landscape of cinema, but it does try to provide you with a memorable character who will stick in your memory. And it succeeds.

Win in our Act of Valour competition