Giuseppe Tornatore’s defining masterpiece Cinema Paradiso (1988) celebrates a Blu-ray re-release and a return to the big screen this month as part of the film’s highly-anticipated 25th anniversary. Memory, nostalgia, and mortality remain the film’s most characteristic themes, and the familiar story of a friend’s passing draws a poignant parallel with the memory and mortality of celluloid in today’s digital age as we remember Cinema Paradiso in the 21st century. 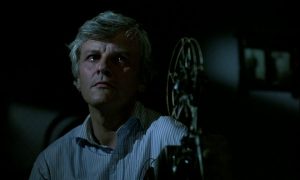 One of Alfredo’s most haunting remarks – ‘don’t give in to nostalgia’ – pervades the fabric of Cinema Paradiso; the film itself longs for a by-gone era, as an adult Toto struggles to come to terms with Alfredo’s death. In the opening sequence, when Toto is told of Alfredo’s passing, the wind chimes echo, haunt, and create a dissonance with the musical score, fading out and enacting his own re-imagination of the past and the virtues of a simpler time.

Being ‘too attached to the past’ re-surfaces throughout the film as a danger, a threat to the bright young people of Toto’s Sicilian hometown, and the act of remembering the past affects the film on many levels. An adult Toto remembers his childhood friend Alfredo, in the same way as a young Toto reminisces about his father who was lost at war. Alfredo remembers turning the projector by hand decades before, as we, today, remember the age of celluloid through the film’s intense focus on the early workings of cinema and projection. 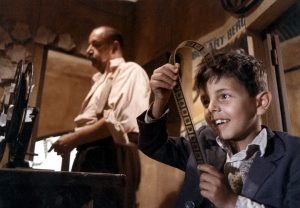 Mortality is one of the film’s most poignant motifs, and the mortality of celluloid is one which resonates strongly today as we look back and remember the film in the context of its original release date in 1988. One of the film’s most haunting scenes is that of the crowds standing outside the smoking corpse of the Cinema Paradiso after it is burnt down, lamenting its death, and yet, moments later, celebrating its renovation. The film reminds us again and again that ‘life goes on’ – a notion which reflects the constant reinvention of cinema, the roots of which are only realised through the act of remembering. Throughout Cinema Paradiso hand projection becomes automatic, film develops into TV, and the cinema moves from a contained space into the space of the great outdoors.

But Toto is constantly reminded by Alfredo that ‘life is not what you see in the films. Life is harder.’ Apart from being a film about the making of film, the projection of film, and the legacy of film, Cinema Paradiso is ultimately a heartwarming tragicomedy about the complexities of nostalgia and the desire to re-imagine an age which brings as many sorrows as pleasures.

Some of these complexities are explored in great detail in the film, such as the pervasive influence of class divides and religion. Despite being separated by upstairs and downstairs seating, however, the cinema becomes a place in which people from all classes and inclinations are brought together, and, in the end, becomes a space of social equality when the bourgeois male who spits on the audience below is met with comic retaliation from the lower classes.

The space of the cinema comes to replace the space of the Church in Tornatore’s film. Community is brought together in the cinema, and the ritual of religion is replaced by the ritual of watching. The Church is a dark, inanimate place, where Toto memorably falls asleep as a child towards the opening of the film. It is a stark contrast against the cinema, which is bright, animate, and becomes a space where people come together and communicate. 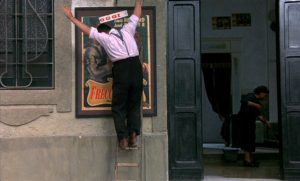 The historical and cultural context of the film is one which reflects today’s niggling nostalgia for a community and culture of watching. Cinema Paradiso speaks of a time when film was vital for hope and escapism. During the dark post-war years, the years when children were ritually beaten in schools, raised by widowed mothers, and where work was done laboriously by hand, film and the cinema became a means through which both adults and children could connect through a romanticised re-imagination of reality.

Through the boundaries between reality and romance, between art and artificiality, Cinema Paradiso to some extent warns us of the dangers of film, but predominantly reminds us of the purpose of film and of its capacity to bring people together in an age in which that vital culture of community risks being forgotten. 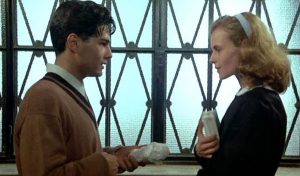 There is a distinct parallel between community and catharsis that manifests itself throughout the film, and one which is more resonant than ever today, when films are watched alone on the tiny screen of an iPhone, or through the headphones of a tablet in place of integrating with and appreciating the real world around us. Cinema Paradiso provides its community a space in which people can come together to purge their emotions: to laugh, to cry, to be frightened. People even copulate, breast-feed, and become steadily inebriated. Every sensation is explored and felt in the safety of this emotionally liberated communal space.

As Alfredo says, the cinema ‘makes them forget their troubles’, and that’s the timeless quality of film that so epitomises the relevance of Tornatore’s Cinema Paradiso in 2013. The cinema might be dead in the end, but its memory remains alive; the echoes of the children’s screams haunt the shell of the building as an adult Toto passes through its corpse and remembers its vitality. It is not the cinema, but the community that the cinema brings together that lives on in time.

At Alfredo’s funeral, Toto is told that ‘the cinema has become a memory’, but even today, when the threat of mortality haunts the act of communal watching, film and its memory remains immortal. The memory of Cinema Paradiso, along with the memory of all classic cinema, is being passed down through the generations: timeless in a finite world.

This review and, in turn the site, have been shortlisted for the Blogger Of The Year award at The 8th Annual Regional Critics Richard Attenborough Film Awards. Please vote for us now (voting ends 22nd January 2014)!  http://www.moviepreviewnetwork.com/awards/blogger-of-the-year