Considering that the last movie I saw Nicholas Brendon in was Demon Island back in 2002, a movie about a killer pinata, I went into Coherence with my expectations about as low as they could be. I like Brendon, I know that he’s continued to work over the years, I just didn’t particularly trust his choice in movie roles.

Thankfully, Coherence is about as far removed as a schlocky horror about a possessed pinata as you can get. It’s a film for fans of more interesting sci-fi fare such as +1 and Primer, and it holds itself admirably alongside both of those titles. In fact, it’s arguably one of the smartest little sci-fi movies in the last decade that wasn’t made by Shane Carruth.

The plot is simple, and has to be for the sake of the small budget and cast (only eight people populate the movie), as a bunch of friends and acquaintances gather together for a meal. There’s a comet passing overhead, and it’s close enough to Earth to cause some problems. Phones end up broken and the electicity supply is interrupted. Oh, then there’s the way it seems to be messing with the minds of the dinner guests, leading them to question their sanity as more and more puzzling events start to unfold.

I REALLY want to go into some more detail here, to help sell the movie, but I can’t. It’s much more fun to go into the film without knowing too much in advance. Things seem to develop, as far as I could make out, in a way that stays logical and smart from start to finish, but it’s easy to lose track of how the whole situation starts to unravel. 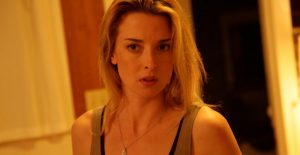 Writer-director James Ward Byrkit certainly knows how to create an atmosphere of growing unease without ever stooping to the obvious cliches or forcing his characters to make stupid decisions. In fact, as the movie runs on, it becomes clearer with every scene just how interesting and smart the film really is. The camerawork can be a bit irritating at times, it’s hand-held and just a bit too shaky, but it also helps to stop viewers of thinking about the limitations of the film. You don’t think about being stuck, for the most part, in one location, or with a handful of characters, because you’re right in the thick of the situation and trying to be as observant as those onscreen.

The cast all do a very good job. Brendon isn’t actually the main character, yet his style and dialogue help to keep the tone pitched perfectly throughout. The two nominal leads would seem to be Emily Baldoni (playing Em) and Maury Sterling (as Kevin). That’s not to take away from the decent performances from Elizabeth Gracen, Alex Manugian, Hugo Armstrong, Lauren Maher or Lorene Scafaria, it just so happens that the movie decides, at different points, to focus on Em and Kevin as the two characters, potentially, most affected by the premise, and it’s right to do so.

There’s enough darkness hinted at here to let this qualify as a horror, if you don’t expect any of the usual genre standards. I would, however, rather recommend it to people as dark, thought-provoking sci-fi. Whatever genre you think it belongs to, do at least give it a watch.