The “godfather” of the American indie film movement known as “Mumblecore,”  Andrew Bujalski (Mutual Appreciation, Funny Ha Ha, Beeswax), has taken an original direction in his new film, Computer Chess, abandoning his focus on his generation in favour of a moment that might seem for him resonantly, awesomely prehistoric. He reconstructs, or simply invents, a weekend circa 1980 computer chess convention  –  long before the sleek age of smart phones and Mac Airs. 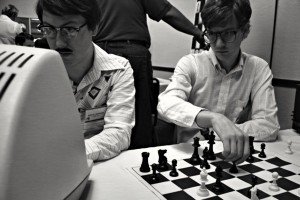 To do this he uses a combination of improvisation, studiously bad hair and unfashionable clothes, and ancient Portapak videotape equipment, mimicking the shooting style that goes with this technology, thus recapturing in the round a scary nerdiness. The result can seem brilliant — or clueless, depending how you look at it; but there’s brilliance in the deadpan accuracy with which the cluelessness is captured . The cult potential of this film is unquestionable. It is instantly recognisable as unique.  And — this is the good part — rather spooky.

It may not initially be such a lot of fun to watch — unless, that is, you’re consciously filtering it through Pynchon and comparing it favourably with Pablo Larraín and and Harmony Korine, which not all viewers will manage. Distinctly odd this certainly is, one of the year’s most original American films; and conceivably a bold new step for Bujalski to greater scope and a wider audience. 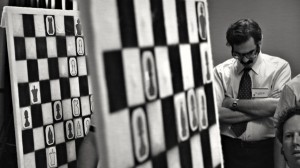 While mainstream film industry critics at Sundance like Todd McCarthy of Hollywood Reporter or Justin Chang of Variety found the film authentic looking but quite boring, hipsters like Mike D’Angelo (who put the film near the top of his list for the year so far and pronounced it “deeply, deeply weird,” and his colleague Vadim Rizov, who called it “major filmmaking,” were pretty ecstatic. The truth probably lies somewhere in between. Sometimes the authenticity is hard to distinguish from bad acting, and at times the humour falls a bit too flat. But anyone must  acknowledge the spot-on evocation of period — even though that period’s perhaps intentionally a bit vague. The consciousness-raising est-like meetings (with a dash of group sex) also happening at the dinky hotel that weekend could be well before 1980 and Spotpak cameras go back to 1969. The bad hair and clothes and sexism evoke something like thirty years ago well, as does the fuzzy black and white video (Bujalski’s ironic response to chiding about when he would move to — modern — video from 16mm. film).

Bujalski intentionally embarrasses us, and even creeps us out when a middle-aged couple from the est-like group try to lure the shyest, youngest programmer, Peter Bishton (Patrick Riester), into having sex with them. The pervasive nerdiness has a terrifying way of making you feel it’s entering you and becoming you and reflecting everyday life more than any other movies do. 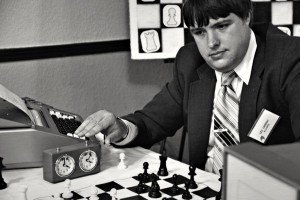 Yet at the same time we also gradually come to the meta-fictional realisation that all this “realism” is highly stylised and deliberately robbed of context.  Lacking are the couple of cool guys who’d set off the gang of nerds and make them nerdier, the way a drop of black paint makes a gallon of white paint whiter.  Real computer programmers and other personalities participate as cast members in Bujalski’s geek game along with huge clunky period computers with clackity keyboards and black screens spewing rows of white digits. They are outsized — but still not capable yet by a long sight of beating a living human chess master. As A.O. Scott notes, “the triumph of I.B.M.’s Big Blue seems a very long way off.” (Actually computers were winning some chess games though, at this time.)

The program of the event is to pit various rival computer chess programs against each other in playoffs, and at the end the winning program gets to play against a human, the arrogant conference leader Henderson (played by academic and film critic Gerald Peary). Some programming team heads like the experimental psychologist Martin Beuscher (Wiley Wiggins) coyly vaunt their personal aims and methods. Others, like Shelly Flintic (Robin Schwartz), repeatedly touted as the tourney’s first female participant, or the shy and possibly brilliant youngster Peter, hover mutely in the background. The boastful and evidently disliked Michael Papageorge (Myles Paige) is for no good reason forced to wander the hotel at night searching for a room. A skinny call girl hovers in front. 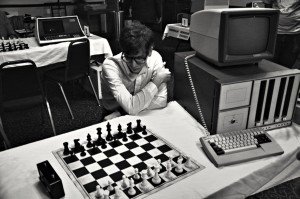 In a mystical sci-fi touch, Peter thinks the computers have souls and the one he’s involved with is failing because it doesn’t want to play against another computer but against a human. The goofy, invasive free love encounter group conference, led by a tall black “African” Papageorge thinks may just be from Detroit, is an obvious contrast (body vs. mind?), and helps round out the sense of period goofiness. The plump lady who tries to seduce Peter says he’ll never reach his “true potential” if he sticks to programming or the 64 squares of a chess board — and so on.

Sudden split screens interrupt the otherwise period video images, which as has been pointed out are more consistently dated in visual style than the use of Sony U-matic cassette video cameras in Pablo Larraín’s No. For a few minutes in an unrelated scene of Papageorge at his mother’s, Bujalski reverts to blotchy colour film. If you have seen the documentaries about the human-computer chess wars (notably Kasparov vs. Deep Blue) you will miss here any depth or excitement in the snatches of games that, as Todd McCarthy wrote, “are excerpted in ways that offer no insight or, God forbid, tension.” In fact Bujalski’s deadpan humour here bets on deliberately letting everything fall flat. That’s the point. 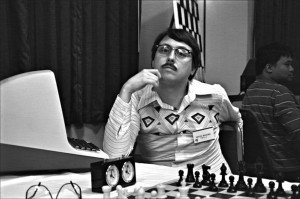 There may be much to ponder here, perhaps most resonant being the idea of a crowd of geeks and nerds who don’t yet know they are to rule the world and of a burgeoning technology that now looks ridiculously primitive, reminding us how ruthless progress is and how clunky and limited present technology is likely to look thirty years hence.  A scary thought.  Are we all nerds, from the future’s viewpoint?  That’s part of the spookiness. Anyway, I saw this a while ago and didn’t react to it much, but since then I can’t get it out of my head.  It stays there like a lump of food one can’t digest.  And in future Computer Chess may be the American indie film of 2013 that will be most remembered — along with Shane Carruth’s equally strange and more beautiful Upstream Color.

Computer Chess debuted at Sundance (surprisingly, a first for Bujalski), in its “Next” section. It was also shown at Berlin. It’s in UK cinemas 22nd November 2013.