Ken Scott’s 2011 French-Canadian film Starbuck was the most Quebec-made successful film within the region that year, yet even though it has been adapted for Bollywood and French audiences in subsequent years, it is still relatively unheard of outside of Canada.  Now, it seems that Scott is pulling a ‘Michael Haneke’ and remaking his own film for US audiences. 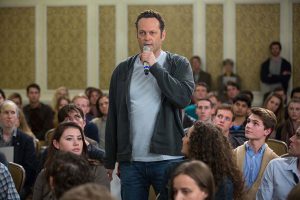 Delivery Man tells the story of hapless David Wozniak (Vince Vaughn); the ‘family loser’, hugely in debt and expectant father with girlfriend Emma (Cobie Smulders).  His life is soon turned upside down when he discovers that he is the father of 533 children, due to an error at the sperm bank where he used to donate as a student.  142 have since filed a lawsuit to reveal the identity of the father, known under the alias ‘Starbuck’.  Now faced with new responsibilities, David decides to act as a guardian angel to each child in the lawsuit, while debating whether to go public with his identity.

The film follows in the footsteps of Funny Games and The Girl with the Dragon Tattoo in revamping an already established film just for fickle English-speaking audiences.  At first glance, it almost seems like a shame that Scott has to resort to ‘selling-out’ his film so that it can get more mainstream recognition and on the most part, it falls short of being more than schmaltzy.  The plot is incredulous and predictable in places, while Smulders is wasted in her role as the long-suffering Emma.  David’s friendship with lawyer Brett (Chris Pratt) highlights an almost competitive on-screen chemistry between the two actors – it looks like one is trying to top the other in the comedic stakes but considering the context, it is not really the best scenario to see who comes across as the funniest. 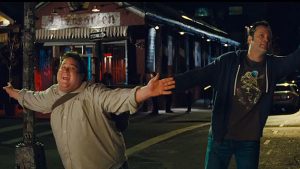 On the other hand, there are some touching scenes, such as David’s tentative relationships with several of his children, as well as the man-to-man chat between him and his immigrant father Mikolaj (Andrzej Blumenfeld).  Aside the initial doubts of whether Vaughn can actually be serious in his performance rather than the man-child he normally plays, he manages to put in a watchable yet awkward performance, ultimately leaving Pratt to provide the funnies (where necessary).

At the end of the day, Delivery Man presents itself as a vehicle for Vaughn to break out of his comfort zone, but the lukewarm performances and ‘Americanisaton’ of Starbuck ultimately underwhelm against the original material.

Delivery Man is out in UK cinemas on Friday 10th January.