There is no shortage of gangsters in film, but it is hard to find one that stands out from the rest of the crowd.  However, when people think of gangsters on television, Tony Soprano is one of the most memorable gangsters in recent years.  With his final film performance, James Gandolfini returns to the genre that made his name.

The Drop is adapted from the short story ‘Animal Rescue’ by the film’s screenwriter Dennis Lehane.  Based in Brooklyn, dutiful Bob (Tom Hardy) works as a bartender at Cousin Marv’s, a bar previously owned by Marv (Gandolfini).  It is now owned Chechan gangsters due to Marv’s gambling debits and operates as a ‘drop’ bar where criminals deposit and collect money.  After a robbery at the bar and the discovery of an abandoned pit bull puppy turns Bob’s simple life turns upside down, he realises that drastic action is needed.

Even though it is the second film of Belgian director Michaël R. Roskam, following Academy Award nominee Bullhead and his first English language feature, it is a well-constructed thriller.   The script is well-written and the tension and intrigue are built from the offset.  The subplot of Rocco the puppy brings a well-incorporated yet soft edge to a dark premise, which is importantly not lost in all of the drama. 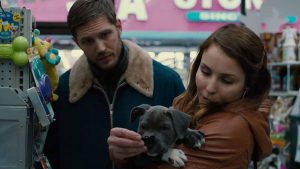 Unlike the majority of his previous performances, Hardy focuses more on emotion and tones down the physicality of his character.  He becomes a seemingly introverted character but in his subtle and thoughtful performance, he represents the most approachable character in the piece, whereas Gandolfini looks a little weathered and bitter in comparison, sadly now a shadow of his former formidable presence.  Noomi Rapace plays love interest Nadia with sensitivity and Bullhead star Matthias Schoenaerts reunites with Roskan as shady character Deeds.

Overall, The Drop may not seem special but its strong cast, well-crafted direction and strong script makes it stand out from other recent gangster films.

The Drop is out in UK cinemas on Friday 14th November.