In this day and age, women are still under-represented in film, especially in certain countries where women’s rights are practically non-existent.  However, the debut full-feature of Pakistani filmmaker Afia Nathaniel dares to bring women into the limelight and portraying them as an inspiration.

Dukhtar (‘daughter’ in Urdu) revolves around young wife Allah Rakhi (Samiya Mumtaz), who was married off as a child to the much older tribal chief Daulat Khan (Asif Kahn).  When Kahn asks for peace from rival chieftain Tor Gul (Abdullah Jaan), the latter agrees on the condition that he is married to Kahn’s ten-year-old daughter Zainab (Saleha Aref).  Unwilling to allow her daughter to be married off like she was, Allah Rakhi and Zainab flee from their isolated town in the mountains with Kahn and Tor Gul’s henchmen in pursuit.  The pair are saved by a truck driver, Sohail (Mohib Mirza), who decides to risk his life by taking the two to Lahore.

Due to a lack of film schools in her home country, Nathaniel pursued an advertising career before leaving Pakistan to work for an international women’s charity in Switzerland.  While working there, she campaigned for women’s rights before establishing her own film production company in Pakistan in 2008. 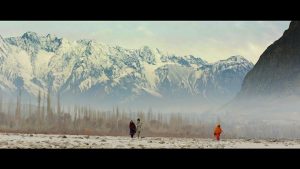 One of the downsides of Dukhtar is its pacing.  It begins with a brisk speed of a thriller and establishes its roots quickly, but this fast pace slows down dramatically.  This initial excitement eventually turns into a lingering tension but as Rakhi’s initial mission becomes an aimless journey, making the film slightly dawdle for the last third of its 93min running time.

However, the swift switch in pace is a very small blip in comparison to Dukhtar’s inspirational portrayal of women.  Nathaniel’s sensitive direction reflects Pakistani life and the country’s picturesque landscapes, but the film’s debatable storyline and personal perspective of local traditions emphasises the rights of local women and children, especially when it comes to child marriages in the country.

With regards to the cast, Mumtaz plays Rakhi with admirable determination and young Aref effectively plays the young and naive Zainab.  Mirza paints himself as the conflicted hero, who decides to go against armed tribes to keep the mother and daughter safe.