If the history books write anything about cinema in 1924, they’ll undoubtedly record it as the year of the unchained camera, Karl Freund and F.W. Murnau’s startling technical innovation for Der letzte Mann. In fluid tracking motions the world of a sad, retiring doorman (played with melancholy and gusto by Emil Jannings) opened up well beyond the 4:3 frame, and suddenly directors were able to express visually the internality of their characters; every movement was a pure emotional expression, a magnification of the doorman’s isolation and desperation, centering him in a frame which would eventually lose track of or abandon him. 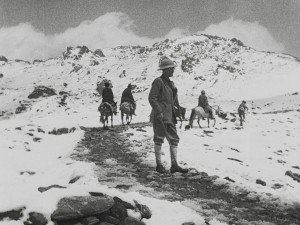 But The Epic Of Everest is about to rewrite the history books, and its story is no mere footnote. The (tall) tale begins in 1922, with Captain John Noel’s second failed attempt to reach the summit of Everest, and the filmed document of his efforts, simply titled Climbing Mount Everest, proving an equal failure at the box office. In 1923 he made an all-or-nothing offer to the Everest Committee, exchanging all film rights for diplomatic access and a clear path to Tibet, vowing to raise £8,000 from his own pocket to make the expedition possible. They accepted, and Noel set out in early 1924 with a crew including George Mallory and Sandy Irvine, explorers who were to lose their lives on a mythic, perhaps even megalomaniacal mission to grapple nature’s greatest monolith. 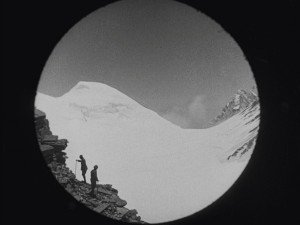 Though antiquated in style and structure, the questions of power and sanity The Epic Of Everest poses – undoubtedly in retrospect, perhaps only in my mind – are as relevant as their incarnations in more contemporary cinema; 1972’s Aguirre, and 2003’s riveting docudrama Touching The Void. The film’s intertitles are unembarrassedly poetic, rapturous odes to the landscape and man’s endeavor, almost Malickian (if that is not too overused a shorthand) in their prose. They are all written by Noel, of course, who was fully ensconced in the romantic notion of his quest, and we come to question his reasons for undertaking such a deadly mission. The nature of silent film means he cannot speak for himself, or reason to the camera – the only sense we get of his personality (and it is only his personality represented; Mallory, Irvine and the crew remain but fleeting faces) is inherently biased and self-absorbed. Could we be watching a record of one man’s madness, or at least unhinged self-belief; a documentary of folie de grandeur?

I too am biased in this sense. I love landscape and ethnographic cinema, films about journeys and seemingly impossible quests into the unknown (which all share roots in that great expedition text, Conrad’s Heart Of Darkness), and watching The Epic Of Everest I found myself completely sucked into Noel’s world; his passion; his energy; his power trip. Simon Turner’s new score, a chilly and ambient fusion of electronic verse and found sounds, is hypnotic in its rhythms, never reaching for hammy sentiment or stirring chords, amplifiers of this quest’s grand nature. His quiet compositions stir in their own way, feeling organic to the landscape, drawing you in, deeper and deeper, to the gorgeous blue and red vistas (the colour tinting is exceptional). How could anybody not want to do this, I thought. Noel’s passion, however dangerous, is truly infectious. 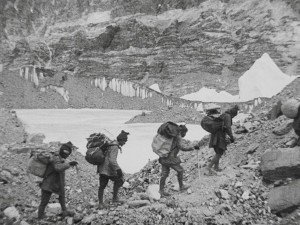 The Epic Of Everest is complex in this sense – its score and intertitles romanticize a journey, lull us into almost a dream state, but then something dramatic happens; the characters become lost, or slip on the cliff face, and the reality of this quest, the notion that it actually happened to people, and what we are watching is documentary, is reinforced. With its incredible framing, telescopic close-ups and gentle pacing, the film would be a masterpiece of early craft and documentary filmmaking without this complexity, which is admittedly a present-tense idea painted onto the film, and an individual interpretation. But for the fact that it is there, to whichever degree you want to see it, makes Noel’s journey invaluable, and endlessly fascinating. 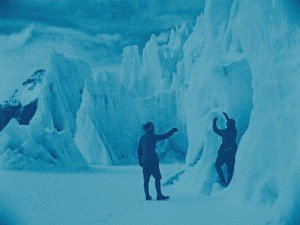 Noel ordered the construction of a photochemical laboratory in Darjeeling, where the day’s rushes could be sent and developed as the quest was still in motion. He invented photographic techniques, cameras and lenses way ahead of their time, and mounted the greatest zooms yet seen in cinema – the clear-eyed view of Everest’s top slope, tinted in an amorous, velvety blue, is an image for the ages. For these reasons The Epic Of Everest is a major revival. But for its suggestions about the human spirit, the obsessive nature of an unknowable explorer, and the fractured sense we get of him via a near century-old scrapbook of intertitles, it deserves to be much more than just a history book statistic – it is a beautiful, realised dream of boyhood fantasy.