In the vast expanse of the jungle, claustrophobia reigns. The wider the space Private Tamura has to cross, the more hemmed in he feels. With the enemy hidden all around, and even more of his side lying dead everywhere he turns, the path out is going to be a long and arduous one. Shinya Tsukamoto’s latest film is hell in the jungle like we rarely see. Journeying through the dark side of the soul has rarely been so illuminating, or terrifying.

At the tail end of Japanese efforts to subjugate the Philippines in the Pacific War, Tamura (also played by Tsukamoto) has come down with TB and finds himself bounced between an aggressive commanding officer and a disinterested medic. Eventually, the argument cedes into irrelevancy when the medical station is destroyed by the enemy. Smoke is left rising over the treeline, a potent sign of destruction that will haunt Tamura several times over. Soon he’s wandering the jungle, falling ever deeper into the abyss as he attempts to find a way out with a collection of broken comrades.

Early on, that escape is suicide. You know you’re in dire straits when you can’t even summon the energy to pull the pin out the grenade though. By the time his ordeal is over, he probably regretted that failure. Shooting with handhelds that hug the faces of the Japanese soldiers, there’s an immediacy to the action that starts to seep into the blood. That is until the blood all comes gushing out in a blur of violence later on. 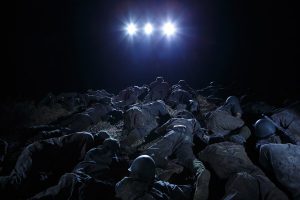 Gore is certainly not spared, but this is war after all. Heads split apart in a hail of bullets while blood sprays out of torsos as if someone turned on a fire hose. The scene of maximum carnage comes as an assorted group of survivors attempt to cross an open field at the dead of night. Crawling along, camera in the dirt with them, bright lights suddenly explode into life causing the advancing Japanese to freeze in terror. Seconds pass before the gunfire starts. At the end, limbs are lying scattered around the floor. It won’t be long until a discarded limb stops being a tragedy and starts becoming lunch. With nothing else left, it’s not so much a viable option as the only one.

Tsukamoto has an eye for the visual fragmentation of his characters, throwing in the right amount of madness. Dying men pierce the jungle with screams that segue into sun-baked hallucinations. Sometimes, the content does find itself let down by style. The handhelds shake beyond the Paul Greengrass line of acceptability. The digital image pops out a little too starkly. There’s a home movie feel in the air.

This doesn’t noticeably damage the nightmare world that Tsukamoto has created here. He’s after nothing less than the complete disintegration of man. By the end, his goal is comfortably met. The next time you see smoke fluttering up in the distance, you won’t know whether to run or break down crying.