It’s the well-known story, the familiar dream of making it big as a musician and leaving your old, ordinary life far behind. Such is the situation we find Jon in, played by Domhnall Gleeson, an office drone chained to his desk job who is desperately seeking some hallowed musical inspiration; a spark of genius he is hoping is inside him somewhere waiting to ignite. When our songwriter and keyboardist happens upon an obscure, underground band (the equally obscurely named and unpronounceable Soronprfbs) while one of their members is attempting to drown himself in the sea, he casually finds his way into the band as a stand-in. Following this comes the opportunity to join them outright and indefinitely pack up to Dublin where they set out to record an album in an isolated woodland cabin.

The leader of the band is the eponymous Frank (Michael Fassbender), an eccentric musician toeing a fine line between radical ingenuity and psychotic mental breakdown. But for all the joviality of their strange, pre-recording exercises, there is a darkness to the band’s existence too. As individuals, they are incredibly volatile. Jon is constantly at war with Clara (Maggie Gyllenhaal), the ice cold bitch sidekick of Frank’s who remains suspicious of his presence and motives. Band manager Don (Scoot McNairy), though a long-time and close friend of Frank’s, crumbles under the bitterness of living in his shadow, never quite able to match his greatness. The other two members outright dislike Jon; Clara threatens to stab him. Jon starts out as a well-meaning and hopeful musician simply trying to find his footing, but as he sinks deeper into their world, he cannot help attempting to realign it to his own tastes and dogma, no matter how ill-fitting. In the process, the group begins to unravel at the seams.

Frank shows an interesting side to Gleeson’s theatrical aptitude as the usually benign and affable young man makes a turn into an individual fuelled by an increasingly crazed desperation, overcome by his need to be known and loved by a mass of fans. Fassbender relies on words and bodily movements alone to convince us of Frank’s humour, his weirdness and his vulnerability, and his ability to conjure a multi-dimensional, dysfunctional creative while any mode of facial expression is barred by the presence of a massive papier-mache head incites pure admiration. Although, as director Lenny Abrahamson joked, “[He] didn’t do a Daniel Day Lewis and keep the head on the whole time – he’s not that method”. Being used to see him in heavy, intense, McQueen-levels of raw drama, it’s refreshing to watch him play out comedy –  a bit dark in places but ultimately wonderfully ridiculous. 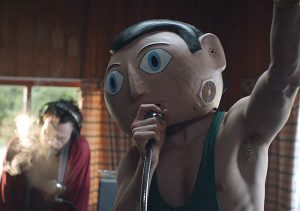 There is something quite bewitchingly satisfying about the group finding their own little insular corner of the universe where they can be a bit (actually, a lot) weird and splatter the deepest recesses of their cognitions across their recordings. But when the band disintegrates, you’re not entirely sure of the direction the film is heading in. While they are sort of floating, disbanded and scattered, the plot is momentarily likewise. It does, however, offer an affecting and sweet ending to resolve this where Frank finds his way back into the fold and Jon learns to let go of what was never his. There is a strong feeling, at the close, that things have worked out exactly as they needed to.