Take a deep breath before you step inside the cinema to see Gravity because you’re going to need it. The film will make you feel tense, sometimes dizzy and disorientated and, yes, ready to gasp for air. But that’s nothing compared to how the main character feels. 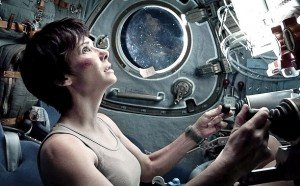 Sandra Bullock plays Ryan Stone and George Clooney is Matt Kowalski. The two are colleagues, with the former being relatively new to her job and the latter being a bit of an old hand. While working to repair a piece of machinery, disaster strikes in the shape of flying debris that knocks them apart. Oh, in case you didn’t already know, Stone and Kowalski are both astronauts. When you’re separated from your colleague in space, things can get very, very scary. 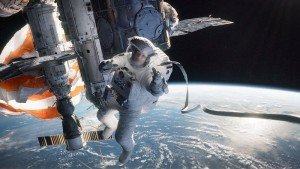 Directed by Alfonso Cuaron (who co-wrote the screenplay with his son, Jonas Cuaron), Gravity manages, for the most part, to feel authentic, which then makes everything that happens doubly terrifying. The script is a solid basis, but everyone involved in a technical capacity is working to a very high standard. The sound design is superb, with silence being used more effectively than it has been in any sci-fi movie of recent years, and the special effects are pretty flawless. Seeing the movie on a cinema screen in 3D will rank as one of my movie highlights of this year. I encourage everyone to make a cinema trip for this one. Trust me, it’s worth it.

Fortunately, the movie isn’t just about the special effects. Despite the technology being used to tell the story, this movie wouldn’t work as well with weaker performances in the lead roles. Clooney is still a bit Clooney-ish, and has less great moments to work with, but the film belongs to Sandra Bullock, and she puts in a performance that I’d nominate as her very best (bear in mind that I have yet to see The Blind Side). I’d even say, and I know this is the kind of phrase that gets overused but I’m going with it anyway (because it’s true), that I pretty quickly stopped thinking of Bullock as Bullock and started just willing the main character to get a bit of good luck. That surprised me, considering how long I’ve had a major crush on Bullock.

There are some pretty big flaws in the movie, for anyone inclined to dwell on them. One or two character moments in the third act really stand out, jarring in their horrible Hollywood-ness after so much good stuff preceding them, and things sometimes feel like they could easily swerve from the incredible to the absurd. It’s also a shame that music by Steven Price is added to the final product as the film either doesn’t need any such music cues or, at the very least, deserved a soundtrack with some heart. 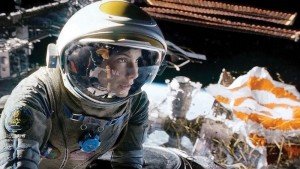 But I am not inclined to dwell on those things. I am inclined to remember just how gripped I was for most of the runtime.