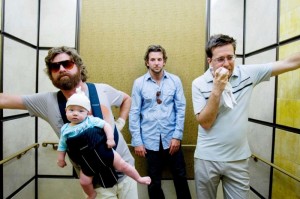 From a mixed bag of Hollywood staples (the night out in Vegas, the morning after the night before, the loss of a friend inconveniently close to an imminent deadline) Todd Phillips creates a genuinely hilarious comedy that places just as much importance on the unravelling of the “forgotten” events than it does on the laughs along the way.

Bradley Cooper plays Phil (laid-back and cool), Ed Helms plays Stu (under the thumb of his unpleasant girlfriend) and Zach Galifianakis plays Alan (a crazy . . . . lone wolf who now feels like he has a wolf pack) and it is these three men who take their buddy Doug (played by Justin Bartha) to Vegas just before his wedding day. It’s going to be the night they never forget but, of course, ends up being the night they can’t actually remember. Everything is made worse by the fact that Phil, Stu and Alan realise they have actually lost Doug . . . . . . . and the start time of the wedding just keeps getting closer.

The reason I really liked this movie so much (and I was actually expecting to be underwhelmed after hearing all of the praise heaped upon it) was mainly thanks to its impressive mixture of intelligence and stupidity. Galifianakis steals the show as Alan and most of his comments are the funniest of the entire film although to explain them out of context would simply leave them looking flat and unfunny. Whether it’s concerning hungry tigers, holocaust rings, inappropriate cursing, babies, strippers or many other subjects covered in the film’s running time it’s often hilarious to hear the conversations between these guys as they veer between the sublime and ridiculous. Well, actually just the ridiculous and ridiculous.

Throwing in such varied components as Mike Tyson, a naked Asian, a stun-gun display, Phillips’ regulars the “Dan band”, a hilarious Rain Man moment, the aforementioned tiger, some poor dental work, a baby possibly named “Carlos” and the kind of spontaneous wedding that could only happen in Vegas and you have so much packed into this comedy that you really could not wish for any more. It even provides a load of crowd-pleasing laughter as the end credits role, pretty much hilarious from start to finish. 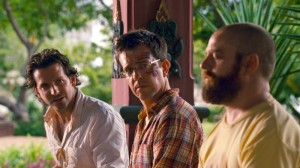 And so we come to one of the most anticipated comedy sequels of recent years. Todd Phillips returns to direct and all of the stars are back to have fun with characters that the audience know and love. The trailer made it all look like it was going to be more of the same but slightly better. But when have trailers ever been honest?

This time around it’s Stu who is about to get married and the action takes place in Bangkok with the guys after Stu’s young prospective brother-in-law (played by Mason Lee) instead of Las Vegas but, those minor differences aside, this is essentially a weak, darker retread of the original. In fact, it sticks so slavishly to the successful formula of the original movie that it constantly damages itself, even in the few decent comedy moments.

For the first half hour or so, The Hangover Part II gets by on a lot of goodwill (in fact, that goodwill has even affected my final score here because I was considering going even lower) and that’s easily earned by the leading men. Bradley Cooper (Phil) is as cool as ever, for the most part, while Ed Helms (Stu) is once again a frothing mass of barely-contained panic and Zach Galifianakis (Alan) gets a lot of the best lines as the idiot savant without the savant part. Phillips obviously thinks that Galifianakis is strong enough in the comedy moments to compensate for weakness elsewhere but that’s not true. Sure, he gets quite a few of the biggest laughs but he also has his share of tics that just feel forced and unfunny this time around.

Remember the structure of the first movie? The phone call, the step back in time to set things up, the frantic race to piece together fractured memories, the catch up to the opening scene and then the revelatory finale – it’s exactly the same this time. There’s even a sequence of photographed debauchery over the end credits. Sure, that helps the audience leave with a laugh but it also shows absolutely no sign of originality. Remember that moment in the first film when Ed Helms sang a funny little song about their predicament? Yep, that’s here, too.

It’s admirable that the plot and twists have taken a darker turn this time around but to work comfortably the comedy needed to be even stronger than the first film. Where the first movie had a sedated tiger being moved this one has a potential corpse being dealt with, where the first film had some jokes about just whether or not the guys were molested while drugged this movie actually reveals some distasteful details about a surprise lovemaking session, where The Hangover had the guys in mild danger The Hangover Part II sees someone being shot, etc, you get the picture.

The performances are all great – as well as “the wolfpack” we also get a returning, hilarious, Ken Jeong while Jamie Chung is the main, worried lady waiting at the altar for her groom-to-be – so the finger really has to be pointed at a script by Phillips, Craig Mazin and Scot Armstrong that fails to wring laughs from a plot involving a severed finger, a smoking and drug-dealing monkey, a bunch of monks, Paul Giamatti and an impressive facial tattoo.

Don’t get your hopes up and you may still enjoy this but it’s not a patch on the original and I’ve now started hoping that they don’t make another one. Because don’t we always end up with one hangover too many anyway?