Rossini is supposed to have said of Wagner that he had some wonderful moments, but dreadful quarter-hours. You might say the same thing of Peter Jackson: there is something Bayreuthian about the excess of everything in his Hobbit saga. Still, he seems to have retained the confidence of the reviewing community: I wonder whether it will last another instalment.

In the months before Ray Harryhausen’s recent passing, giants of cinema from James Cameron to Nick Park, notably including Peter Jackson, queued to salute the stop-motion king. It was Harryhausen who fired the imaginations of these young auteurs as they watched raging plasticine dinosaurs and rickety skeleton warriors duke it out with Sinbad, Jason, Raquel Welch and others across countless other corny heroic fantasies a now bygone era.

Harryhausen was undoubtedly a matinee genius but the films he worked on were, in their day, technological more than cinematic achievements. (Sample quote, from Seventh Voyage of Sinbad: “Classic Harryhausen. May not be heavy on plot, but who cares?”)

George Lucas, a fellow Harryhausen devotee, never pretended his Star Wars franchise was anything other than straight-up homage to the comic book serials and B-grade melodramas of his youth. But Peter Jackson, for all his due deference, is supposed to have aspired to greater things. With the second instalment of his interminable Hobbit saga we now know this not to be the case: it is pure, cornball Harryhausen for the 21st century, Pentium processors replacing plastic stegosauruses but otherwise every bit as cheesy and, in the leaden sequences between cave-girl-fancying monster tortoises, just as tedious as anything from One Million Years BC. 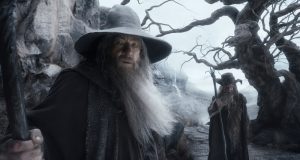 No doubt bored of reverend Tolkien scholarship, Jackson has started making stuff up and has oriented all drama around what his inner Harryhausen likes best: scowling orcs, growling wargs, rutting beasts, fruity elves and improbable hand-to-hand combat between the lot of them.

As far as Tolkien was concerned there were hardly any orcs, no Sauron, few Elves and no Legolas in the Hobbit. However pleasing Evangeline Lilly’s elven features may be, Tauriel doesn’t even feature in the appendices, and she certainly didn’t flirt with any dwarves. Why Jackson felt the need to insert dreadful quarter-hours of these creatures hacking each other to bits is difficult to fathom. There are some inventive kills, but none of the action bears at all on the plot. But at least the orcs and fairies do dispose of one other: no-one can lay a finger on the dwarves, and good old Dildo lives a charmed life throughout. 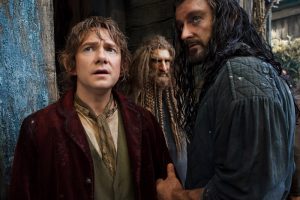 Countless other secondary characters buzz the screenplay like so many horseflies. They too could also have used a morgul blade to the chops: Stephen Fry’s walk-on is surplus to requirements, as is Legolas’, and a shape-shifting bear man, some well-rendered but time-wasting spiders, a new orc 2.I.C. and the rabbit-wizard from the first instalment (this time minus his bunny sled) do nothing but slow the progress of our dogged little dwarves.

Finally they do reach their Lonely Mountain (sorry if this gives the game away) only to find a monologuing dragon who won’t shut up for 45 minutes and who, while anticipating their every move, somehow cannot so much as singe a ginger beard. He lies on a treasure of coins and valuables so large that he could, were he properly advised, defeat the dwarves, Shire People, Lake People, Orcs, Elves, Rohirrin and probably even Sauron himself simply by dumping his hoard of currency outside the mountain. There’s not a dark force on Earth to rival the awesome power of hyperinflation.

Meantime we wonder whether we haven’t been sold the most outrageous pup. The result of our three hours’ toil is a series of scoreless draws: Dragon versus Dwarves; Orcs versus Elves; Elves versus Dwarves; Lake People versus Dwarves; Dwarves versus Dragon; Dragon versus Hobbit; Boatman versus Lake People; Dragon versus Boatman; Necromancer versus Wizard; and Bear-shape-shifter against himself. Jackson apologists will say it is all yet to kick off but, by gum, we shouldn’t have had to wait this long for some resolution. Nine hours is not three but SIX standard-length feature films.

One ruthlessly edited feature film ought to have done the job, even if it meant Orlando Bloom and Stephen Fry missing a trip to the Land of the Long White Cloud.

Tchaikovsky said of Gotterdammerung that, after its last notes rang, he felt as though he had been let out of prison. As the feeling seeps back into your buttocks and you join the snaking queue for the loo at your local theatre, you may well know how he felt.