You can tell whether a story is good by its ability to engage the reader from the beginning to end.  When it comes to films of recent times, it is the same conundrum with the Lord of the Rings trilogy; each outing needs to be as good, or better, than the previous film to continue its now-unique success.  However, when news came out that The Hobbit – one story – was going to be split into three, slightly overlong, feature films, there was intense speculation as to whether this was necessary.  Now, we’re about to find out.

The Hobbit: The Desolation of Smaug sees the troupe continue onto their quest.  While Gandalf (Ian McKellen) investigates a strange development, the dwarves and Bilbo carry on towards the Lonely Mountain, encountering along the way Elves (including fan favourite Legolas, once again played by Orlando Bloom) and Orcs, before coming face-to-face with a certain dragon called Smaug (Benedict Cumberbatch)…

First things first – it is the dreaded sequel.  Not only does the film have to fight off the critics protesting about the expansion of the story to accommodate three films but The Desolation of Smaug has to also contend with being the ‘middle’ film in a highly anticipated trilogy.  When push comes to shove, it can either pull off being as strong as The Hobbit or lack in its punch.  Unfortunately, its general plot is quite weak and together with the slightly lacking dialogue, they do not help justify the lengthy 161 minute running time.  Certain sub-plots, mainly those involving She-Elf Tauriel (Evangeline Lilly) and Elvenking Thranduil (Lee Pace) are also disappointing – in fact, most of the characters now seem to portray themselves as more-focused characters, essentially losing most of the wit and charm they had shown in the previous film.   This ultimately leaves the film on the shoulders of Bilbo (Martin Freeman) and Gandalf, whose short-yet-sweet screen presence gives The Desolation of Smaug its much-needed continuity and fan anticipation. 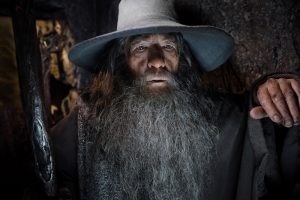 However, Jackson shows that in terms of visual effects, he still has the goods.  From the thrilling action sequences (the spider sequence, in particular, is enough to send shivers down your spine) to the breathtaking landscapes, it is hard not to get lost in the splendour of Middle Earth once more.  Freeman plays Bilbo with a newfound confidence, obviously settled in the grandeur of Jackson’s vision but in terms of performance, the standout is easily the silver tongued Smaug.  Cumberbatch plays him with a cunning sneer that almost comes across as arrogant, but his smoothly delivered threats and barely concealed rage keeps you on the edge of your seat.

Fans of the book and series will have their differences on the film but on the most part, The Desolation of Smaug doesn’t disappoint.  Despite its questionable plot lines and dialogue, it ticks the boxes as an action-packed, visually stunning feature.  Roll on 2014.

The Hobbit: The Desolation of Smaug is out in UK cinemas on Friday 13th December.