It was five to ten minutes into The Human Race when I realised that I hated writer-director Paul Hough. Don’t take that as a mark against the film, it’s a good thing. He’d managed to pull the rug from under my feet. The fact that he would do so again on at least two occasions made me hate him even more. I can’t wait to see how his career develops after his fictional feature debut (he has previously cut his teeth on a number of shorts and a documentary about backyard wrestlers). 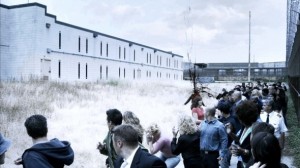 The premise of The Human Race is deceptively simple. Some people are snatched from their everyday lives and forced to compete against one another in a race. Arrows mark out the course. Stray off course and you die. Step on grass and you die. Get lapped twice . . . . . . and you die. There are three “safe” areas: a house, a prison and a school. No concessions are made for the participants. One is an elderly man who has his running days far behind him, one is a pregnant woman and one (Eddie, played by Eddie McGee) has only one leg. Everyone is bewildered and afraid to begin with, but it doesn’t take long until people realise the severity of the situation and start trying to seriously compete.

With a decent cast of unknowns (apologies, but they’re certainly unknown to me), a playful script and Hough proving himself more than competent with the technical side of things, The Human Race mixes some sci-fi and horror elements with a look at the best and worst of human nature to make a consistently interesting and thought-provoking piece of entertainment. 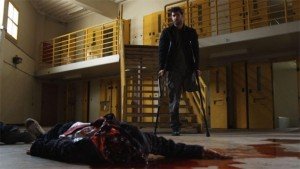 It’s unfair to single anyone out for extra praise *cough* Eddie McGee *cough* as everyone does a great job of quickly getting viewers to either root for or against them, Brianna Lauren Jackson, Paul McCarthy-Boyington, Trista Robinson, T. Arthur Cottam and Fred Coury are all particularly worthy of mention. 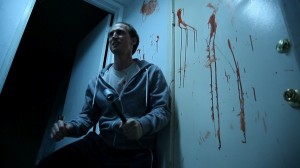 Most of the praise, however, has to go to Hough. He’s taken a modest budget and managed to put every cent onscreen in order to realise his vision. The ideas that he works through the narrative aren’t hugely original, but he puts them together in a way that makes the whole thing more than the sum of its parts, teasing out details and leading the characters, and viewers, to an impressively realised, and surprisingly satisfying, finale.

I look forward to seeing whatever Hough does next, and I think that a lot of movie fans will feel the same way once they see The Human Race. At least, I certainly hope that’s the case. 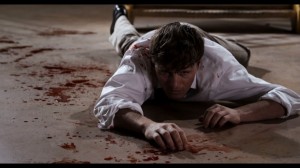 The Human Race is currently doing the festival rounds, including a showing at Grimmfest on the 5th October and a showing at Horrorthon on the 24th October.

We need you! Become a part of flickfeast