The novel on which The Hunger Games: Mockingjay Part I is based is, by a distance, the weakest of Susan Collins’ trilogy, so it is for commercial rather than artistic reasons Lionsgate have resolved on a two part treatment. That worked for Harry Potter and The Deathly Hallows because it was an enormous (and excellent) book; beside it New Line’s three-part Hobbit melodrama looks like an exercise in rank cynicism.

So far, Francis Lawrence has got away with it here.

A couple of passages flag but, by and large, the narrative bounces along and the early exchanges, in which Lawrence sets out his conceptual stall, are excellent, and spoiled only by some silly acting by his namesake.

We rejoin the action with Katniss having been rescued, ensconced – or imprisoned? – within the fabled District 13.  These District 13 guys are about as different to the ruling elite of Panem’s capitol as can be, except where they’re not: functionally unflattering jump suits and love of the democratic ideal is imposed on the people, whether they like it or not (the show-stealing Effie Trinket (Elizabeth Banks), who has been “rescued”, emphatically does not: she misses her moisturiser).

Besides, the rebels already have a healthy regard for propaganda, they’ve boned up on their Marshall McLuhan, two legs are already better than four, and you just sense the iron gray hair of President Alma Coin (Julianne Moore) has a touch of Snow about it.

In any case the proletariat has an alarming fondness for a collective fascist chant which First Comrade Coin takes no steps to quell as she addresses the huddled masses in a tone which is unadulterated passive aggression.

In the mean time, Katniss does her bipolar thing, aided by an elite commando camera crew. We are never sure whether Katniss Everdeen is her own greatest asset or worst enemy, and patently, neither are her new paymasters in District 13. 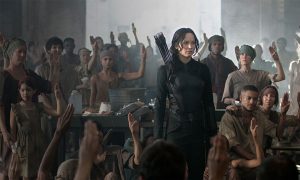 So the schema is good, in early exchanges the acting less so, Jennifer Lawrence almost ruining by over-emotion a sequence where she returns to a blasted District 12, carefully rendered as a blitzed Palestinian ghetto but with twisted World Trade Center gantry punched through. She does settle down and the second half of the film is more nuanced, though it checks the archetypal waystations rather methodically as it goes. The rebels live in an  underground bunker bred of The Empire Strikes Back and The Matrix: Reloaded,  so it is hard not to see this film as a fugue on exactly the same theme. In many ways, it is.

It is poignant to see the late Philip Seymour Hoffman looking apparently well, and sad that his last film role is limited, but he enjoys himself in a nicely reflexive gag on the frustrations of green screen acting. Plutarch Heavensbee (Hoffman), a dried out Haymitch Abernathy (Woody Harrelson) Elizabeth Banks’ magnificently stoic Effie Trinket and a bagged cat provide excellent comic relief, while Francis Lawrence feels obliged to have the intense Gale (Liam Hemsworth) and intenser Peeta Mellark (Josh Hutcherson) compete astrally in a bizarre love triangle with Katniss which is the weakest of Collin’s plot devices.

It’s an engaging film. Where Mockingjay succeeds best is in conveying Collins’ underlying political point: there are no impermeable boundaries between war, media, theatre, politics, propaganda and entertainment. Katniss is kitted out with high-tech gadgets like 007; we watch her progress on screens like Call Of Duty. We may be, as Neil Postman memorably put it, amusing ourselves to death, whichever side we think we’re on. On the other hand, Katniss’ few moments of solidarity with the poor huddled masses don’t work half as well as they did in the first two films.

It is difficult to say much more without spoilers, but we leave the game nicely balanced – President Snow sneaks an equaliser on the stroke of half time, so we can look forward to a total war resolution in the final instalment.