The latest in tween-age adoration was on parade for the premiere of a new franchise vehicle, The Hunger Games last night.

Appropriately, an entire legion of screaming jailbait was on hand to swoon at Hollywood’s latest hearthrob creations and as such the nation’s press was there to relay the spectacle. 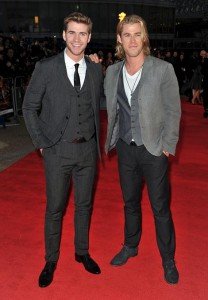 Liam Hemsworth was crowned the prince of puberty last night, judging by the rapturous screams he received on arrival. The Australian actor plays Gale Hawthorn in the screen adaptation of the popular book of the same name. His sky rocketing success means he will have to face this everywhere he goes. However like most Aussies they don’t get too fazed by the hysteria, “Im trying to be prepared for the reaction”, he joked. Adding that he was, however, under some pressure at how big the franchise will become. “I was a lot more nervous before I had seen the film but now that I’ve seen it , it’s one of the most powerful”. His co-star Josh Hutcherson couldn’t display the same level of confidence, he played down his net worth even more casually, sauntering along the red carpet in an ill advised brown suit ensemble. 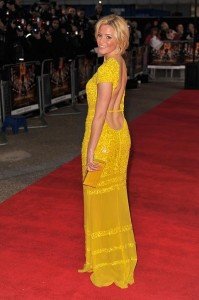 Any attempt at colour on the red carpet should, without question, be left to the ladies, unless you are in the league of a Bruno, Borat or any other creation by Sasha Baron Cohen. Foxy blonde Elizabeth Banks knows how to sparkle at an event. In a fantastic happy-go-lucky canary yellow dress, she was ready to to teach these ladies a thing about glamour. She mentioned the name Bill Blass. Who, for fashionistas is synonomous with American sensibility. For the rest of us, she just looked fantastic and fun. She mentioned briefly how enthusiastic she was for the role, noting that she had read the books long before and jumped at the opportunity when the role came her way. 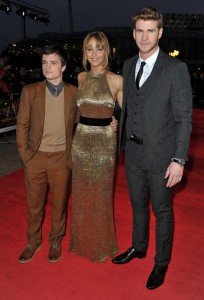 Not to be out-sparkled, leading actress Jennifer Lawrence, who positively radiated in a full-length golden dress, showed us her ambitious yet delightful charm. Her strength of character came though in her short, well executed rapid fire responses at one point stating that she will always act in indie films but would be willing to make her own films if they don’t hire her anymore. Talk about ambition, and in one so young. 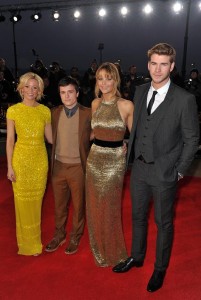 man of leisure , scribes for love.