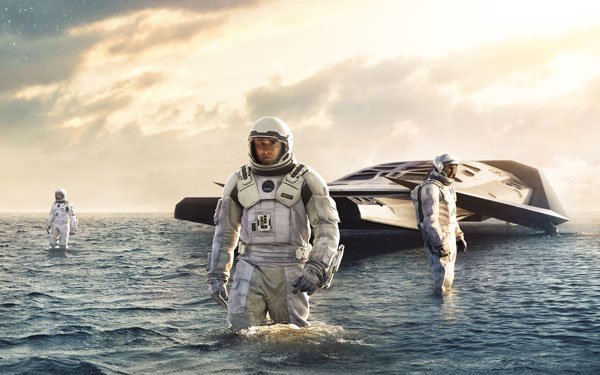 After finishing his successful and acclaimed Dark Knight trilogy, Christopher Nolan had a point to prove to fans and critics: that he can step out of his tenure and revisit the noir style that made his name.  In his most ambitious feature to date, Nolan goes into the great unknown.

Interstellar is set in the near future, where the world’s crops are running low, threatening mankind’s chances of survival.  Former pilot/engineer Cooper (Matthew McConaughey) lives with his father-in-law Donald (John Lithgow) young children, son Tom (Timothy Chalet) daughter Murph (Mackenzie Foy), who is an aspiring scientist.  Cooper and Murph stumbles on a covert operation Lazarus, which is the remains of Nasa, led by Professor Brand (Michael Caine) and his daughter Amelia (Anne Hathaway).  In a bid to save mankind, Cooper finds himself part of an intergalactic team to travel on the space vessel Endurance, to investigate a distant solar system through a wormhole discovered 50 years before.

Interstellar is essentially a 166min lesson about the complexities behind the idea of time and relatively, with Nolan boosting the genre of science-fiction by recreating his own space survival voyage.  It is conceptual to say the least but the ideas behind the mission is flawed and it is ultimately driven by the emotive aspects of the film’s protagonists.

A more moral yet less conflicted role than those in Dallas Buyer’s Club and Magic Mike, McConaughey plays the voice of reason in the film.  Cooper is not driven by his need to save the world but those he cares about and a particular scene that shows the effects of travelling with extreme time differences is enough to break the coldest of hearts.

On the flip side, Hathaway’s Amelia feels slightly underused in the feature.  A focussed character with a level of determination and commitment to the mission, she provides a foil against Cooper’s charm but when she monologues about the power of love, it doesn’t come across as powerful as it should do.

Caine and Lithgow are on hand to provide words of wisdom and play two different father figures but Nolan has struck a chord in Foy’s young Murph.  As tender as Foy’s performance is, she effectively breaks the mould that pre-pubescent girls in cinema are not ‘into’ science, making her a more developed character than any of the others in the film.

As it is a Nolan film, Interstellar looks stunning in capturing the visuality of galaxies, wormholes and black holes, and the idea of life beyond our galaxy is always that will draw the attention of even the most skeptical filmgoer.  Unfortunately, these elements may not enough to impress anticipating fans.

Interstellar is out in UK cinemas on Friday 7th November.

Insectula: An Interview with Micheal Peterson and Danielle Cezanne