It’s normally difficult to find films tackling child abuse outside the realms of TV and charity commissioned shorts, yet this type of subject matter often has the potential for powerful cinematic storytelling. Part of this distributive gate – keeping is perhaps a symptom of defining ‘child – abuse’, as when stories of childhood in crisis are explained as a result of social issues or war (Empire of the Sun, City of God) the films become socio – historical documents, with spectacle and style often abstracting the complexities of child psychology and behaviour. As part of the ‘focus on Germany’ strand at EIFF 2014 Jack was a film that managed to tackle child abuse in an engaging and ultimately believable way.

Following the experiences of a ten year old boy who has gained a maturity beyond his years in a fatherless home, Jack is often tasked with myriad parental duties including looking after his brother. While his affection for his often absent mother inspires an idyllic happiness in Jack, her self – negligence indirectly leads to an accident that breaks the family unit, forcing Jack into care and subsequently on a desperate journey, reclaiming his brother from a care provider and setting out to find his missing mother. As a film about discovery, maturity and child abuse, director Edward Berger’s emotion wrought slice of cinema verite is a powerful experience, sustained and heightened by the performance of Ivo Pietzcker in portraying a child with enough agency, determination and desperation to survive for 3 days on the streets. 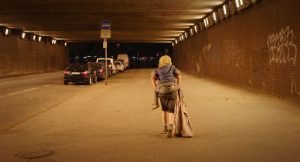 Although the film has its moments of beauty, often occurring in the paternal interactions between Jack and his younger brother, the story undeniably has its grimmer elements which director Edward Berger and co – writer Nele Mueller – Stofen in no way gloss over. From sociopathic bullies at the care home, the hostile and indifferent attitudes of the adults Jack encounters and the negligent unapologetic mother herself, the film repeatedly visits extremely dark territory : yet the main force lies with Jack’s own resourcefulness and determination and his sheer belief to pull through in the face of adversity. As a film that spends the majority of its time following two young boys navigate heroin junkie filled parties, sleeping in burnt out cars and becoming fatigued through malnourishment, it is at times an uncomfortable and traumatic viewing experience. While the director allows audience to draw their own conclusions, the film is told purely from a juvenile perspectives, giving the films both power and consistency and allowing the behavioral details of the major and minor characters added thematic weight.

As a similar experience to Francois Truffant’s ‘400 Blows’ Jack explores ‘lost’ children’s odysseys of self-discovery, rebellion against institutional norms and resilient delusion in the face of ultimately flaccid parentage. Yet in contrast to Antonie Doniel’s last elliptic glance at the camera in ‘400 blows’ Jack’s final act is one shaped by his experiences as a surrogate parent, thankfully leaving the film on a note of hope rather than horror. Deeply character driven and beautifully shot,  Jack is part family – drama, part psychological road movie: where ‘family’ is the destination and the lessons learned in transit will never be forgotten.