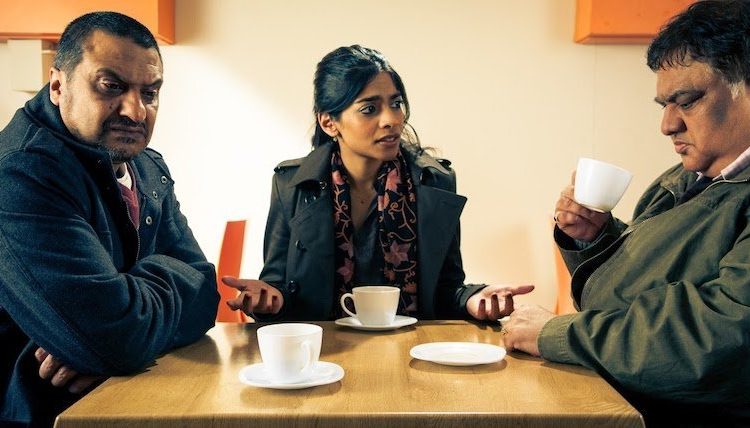 It has been a while since British films have delved into its multicultural side – since East is East (1999), it is a theme that has not been intensively portrayed on-screen.  However, this gem, which debuted at the 2013 Berlin Film Festival, serves up a feast for the eyes with a side of family dysfunctionality to boot.

Jadoo is a film set in Leicester’s Belgrave Road (also known as the ‘Golden Mile’), famous for its Indian restaurants and sari shops.  Two brothers, Jagi and Raja Chandana (respectively played by Kulvinder Ghir and Harish Patel), have fallen out spectacularly and their intense rivalry now sees them work against each other.  Both talented chefs, they each own half of their family recipe book so Raja specialised in starters and Jagi in main courses.  When Raja’s daughter Shalini (Amara Karan) announces her engagement, she forces the two brothers to put aside their differences and reconcile.

The premise of this is very simple and the dialogue, though light-hearted, lacks punch.  The subplot of the timely espionage between the two brothers is unfortunately not developed enough and the film is slightly predictable in places.  Director Amit Gupta, whose last film Resistance (2011) starred Michael Sheen and Andrea Riseborough, had the wish of translating his childhood memories and the family life he experienced on-screen and the consistent themes in Jadoo – food and the importance of family – are enough to keep the film from falling apart.

Having the feature filmed in Gupta’s hometown adds authenticity; the buzz from the local community shows on-screen, especially during the Hindu festival of Holi, and the dishes featured are mouth-watering.  Karan seems to take centre-stage in Jadoo as her character fights to bring her father and uncle together, and when they do, they bounce off each other, showing a mutual balance of sensitivity and comedic timing.

However, what sets Jadoo apart in particular from other multicultural films is its modern attitudes, rather than conflict with traditions; there is no argument about Shalini’s mixed-race relationship, which is frankly a breath of fresh air.

Jadoo is the delightful result when you mix ‘Bend it Like Beckham‘ meets ‘Waitress‘; a simple, enjoyable comedy that will make your stomach growl.