I’m not sure how long it’s due to last, but I recommend that everyone makes the most of David Gordon Green’s work now that he’s moved back to smaller, more intimate, movies after the hits and misses of Pineapple Express, Your Highness and The Sitter. Prince Avalanche was, from what I gather, a return to form, and Joe consolidates the successful comeback (if that’s what we can label it, I’m going with that anyway).

Nicolas Cage stars as Joe, a man with a troubled past who now tries to do the best he can for the men working under him. He’s in charge of a contract that sees them killing off trees, allowing for people to then plant new, better, trees and improve the landscape. When a young lad (Gary, played by Tye Sheridan) asks about gaining employment, Joe decides to give the 15-year-old a shot. He soon finds out that the kid works hard, unlike his alcoholic and abusive father. Joe resigns himself to the fact that he really wants to help out Gary, which may mean that he has to tap into the well of anger he’s been trying to keep control of since getting out of prison years ago. 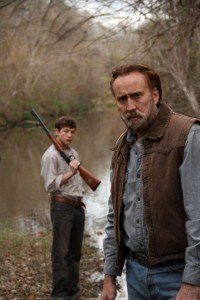 Based on a novel by Larry Brown, Joe benefits from a great script by Gary Hawkins, confident and restrained direction from David Gordon Green, and a number of great performances from everyone in the cast. Yes, even Nicolas Cage shows everyone that he can still do great work when called upon, giving his best, and most non-Cagey, performance in years. It would have been all too easy for the man to go manic once more, and it’s admirable that he stays away from that style, for the most part. Sheridan plays off him perfectly, showing a determination and anger that allows viewers to quickly see why Joe wants to help him. The two are obviously similar, although the older man likes to think that he’s grown wiser with the passing of time. Gary Poulter and Ronnie Gene Blevins also excel, portraying two different, but equally loathsome, men who cause problems for the main characters, and Adriene Mishler may seem to be short-changed, as the one main female character in a male-dominated storyline, but she certainly makes the most of one or two effective moments that show how good-hearted she is.

This is a slow burner, with plenty of tension always bubbling away under the surface. It’s not quite up there with Sling Blade or Blue Ruin, for example, but it comes close. Let’s all just hope that Green remains content to stay away from the stoner comedies from now on. And if Nicolas Cage is proud of the final result, as he should be, then let’s hope that he tries to take on more roles that eschew his usual, over the top, persona. He may not be capable of a McConaughey-like renaissance, but he could easily drag his reputation back up a notch or two.