A drama from the director of Pineapple Express and Your Highness did not appeal that much, but I was pleasantly surprised with Joe.

Joe (Nicholas Cage) is an ex-con living in a small town in the Deep South with his vicious American Bulldog. He works hard, enjoys a strong drink, the company of the local working women and people seem to like him in the town. But Joe can’t help getting into trouble and immediately we learn that he has got on the wrong side of a local bad guy by slapping him and embarrassing him in front of his friends. When the town gains some new inhabitants in the form of 15 year-old Gary (Tye Sheridan), his drunken father, useless mother and mute sister, Joe helps the boy out by giving him a job and soon the two develop a strong bond. But as Joe tries to help Gary with his abusive father, he has to battle his own demons; can he stay out of prison long enough to make a proper life for himself? 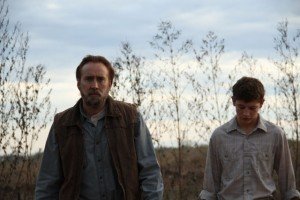 Nicholas Cage is perfectly cast as the unlikely role model, he has already proven he is great at playing flawed heroes in films such as Werner Herzog’s Bad Lieutenant (2009), but here he plays much more than that, introducing a paternal side but still retaining that famous Cage persona in an understated way. An inspired scene later on in the film sees Joe teaching Gary how to look cool, or indeed how to perfect that Nicholas Cage look, and this injects a nice bit of humour into an altogether intense experience. However, this film is not all about Joe and it is Tye Sheridan who really stands out as Gary. Already establishing himself as an up and coming actor opposite Matthew McConaughey in the brilliant Mud (2012), Sheridan does a superb job as the teen on the verge of adulthood, desperate to make a future for himself and his family and willing to do anything to get there. 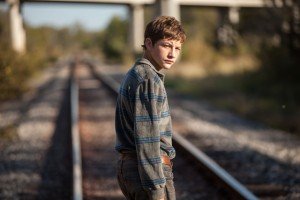 The Deep South has been the focus of many a famous story, more often historical rather than contemporary, and here the film depicts the extreme poverty and decay that still exists today in that area, which is both shocking and fascinating. We are also introduced to a wealth of fascinating characters which help to build the story and produce an enthralling world to follow, Joe’s group of workers are particularly great.

This is really a performance driven piece, but the story is strong and the film is nicely shot, opting for subtle naturalism that makes the film feel truly authentic. The acting really steals the show though and discussions are already abound as to whether Cage will be nominated at the Academy Awards for his performance in Joe. It certainly is an award worthy performance, but whether the graphic violence and gloomy subject matter in the film will deter from this is unclear. 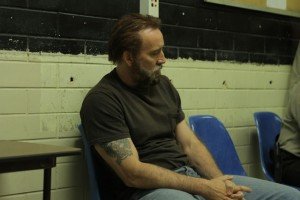 This is quite a grim film but don’t let that put you off, there are also some beautiful and funny moments and the scenes between Cage and Sheridan are particularly memorable. Both actors ensure we like the characters and enable us to invest in the story. Gary Poulter also does an incredible job as Wade, Gary’s detestable father, portraying a vast array of different sides to a man driven to desperate measures, even after everything he does we see the extreme vulnerability in his eyes towards the end of the film.

Joe is not a particularly innovative film but it is completely absorbing with a layered central character and an abundance of other wonderfully written and acted characters to drive the film along. Cage proves once again that he is capable of slow, indie films as well as the Hollywood blockbusters and it is nice to see him return to the former. My faith has also been instilled in the director and I will now seek out some of his indie offerings.