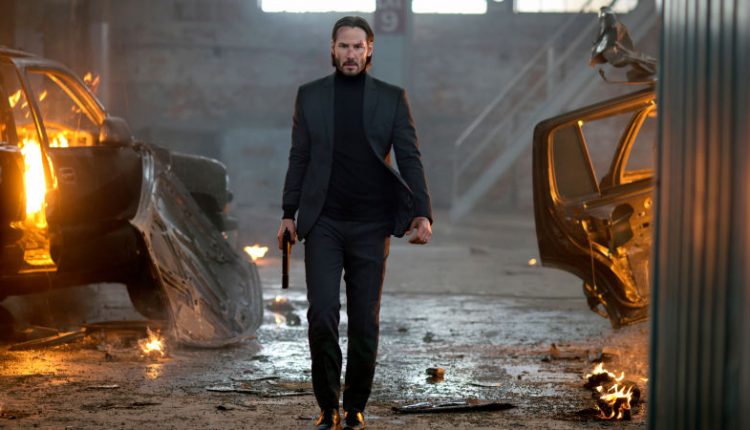 After appearing in films such as Tron: Legacy and The Matrix Trilogy, stunt coordinator/actor David Leitch makes his (uncredited) directorial debut with a homage to Hong Kong cinema, spaghetti westerns and ‘gun-fu’ films.

John Wick stars Keanu Reeves as the eponymous character, a retired hitman who recently lost his wife (Bridget Moynahan).  As her last wish, she gifts him with Daisy, a Beagle puppy, to help him with his grief.  One day, his vintage Mustang catches the eye of Russian gang leader Iosef (Alfie Allen) and after John refuses to sell the car to him, Iosef breaks into his home, steals the car and kills Daisy.  This causes John to effectively come out of retirement to seek vengeance, even if it means going after his former boss and Iosef’s father, Viggo Tarasov (Michael Nyqvist).

The style influences behind John Wick are evident and they crop up so often, they brush aside any originality in the film.  Additionally, the plot lacks substance, giving directors Leitch and co-director, fellow stunt coordinator Chad Stahelski, little leeway to create a genre-changing action thriller.

However, relatively new screenwriter Derek Karlstad doesn’t try and pretty the film up with morals and reasoning behind John’s mission; at the end of the day, John Wick is about the good guy being a complete badass and the bad guy getting what they deserve.

The film is occasionally light-hearted, with its humour varying from the amusing reactions to John’s name and multiple explosions to slick, well choreographed action scenes. The criminal underworld in the film is more exclusive than seedy and the idea of it being a secret society gives it more class than typical gangster or assassin films.

After the disappointing 47 Ronin, it is good to see Reeves in a decent action role with enough promise for a sequel. Nqvist is also watchable in the film as the quiet, menacing gangster Viggo, and notable mentions include Willem Defoe and Adrianne Palicki, who play fellow hitmen.

Overall, John Wick is all about the chaos. Occasionally ridiculous, it is action-packed, stylish and a return to form for Mr Reeves.

John Wick is out in UK cinemas on Friday 10th April.

The SpongeBob Movie: Sponge Out of Water (2015)