Nowadays, the world is connected through modern technology.  Social media, video chats and even texting are just a few of the mostly used methods of communication as it seems simpler to touch a few buttons rather than connect to someone in person. But quirky director Spike Jonze takes a bold step in his first directorial feature without the weird skills of his screenwriting collaborator Charlie Kaufman, and challenges the emotions of a relationship based on technology.

Based in an uncertain future, Her tells the story of Theodore (Joaquin Phoenix), a depressed correspondence writer who creates letters and is on the verge of divorce from the assertive Catherine (Rooney Mara).  Besides his neighbours Amy and Charles (Amy Adams and Matt Letscher respectively), he keeps himself to himself but on a whim, he buys a new artificial intelligent operating system, which calls itself Samantha (Scarlett Johansson).  Theodore soon starts to develop a relationship with Samantha that becomes incomparable to everything – and anyone – else. 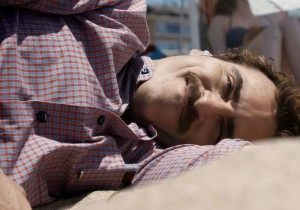 Jonze’s artistic detachment from Kaufman, who wrote Being John Malkovich and Adaptation, may have been a slight risk but in his first solo effort, he highlights a very modern problem in amidst a stylish, sun-kissed eden.  In the film, people send letters that are written by a company and singletons prefer the company of a machine – in its own way, the fact that our connections are becoming emotionless each day is a scary thought, yet Jonze manages to weave the heart and soul of his story into an unorthodox relationship without being over-sentimental in his script.

Even though Her follows the footsteps of Lars and the Real Girl and Ruby Sparks that the idea of a man and a non-human entity can have a relationship, something about Spike Jonze’s feature delves a little deeper than the idea of being it taboo – doe-eyed Phoenix and the sultry-voiced Johansson play the couple with subtlety and their genuine connection resonates on an emotional level, laced with the same ups and downs of any normal relationship.  Mara and Adams are slightly underused in their supporting roles, but their characters compliment each other nicely and are not overemphasised as Theodore’s ‘other women’. 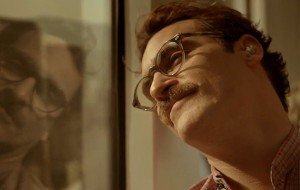 Overall, Her is a beautiful film – wonderful acting, great story and dreamy soundtrack.  Miss it and you’ll miss out.