Lucien Carr (Dane DeHaan) is a charismatic and rebellious student at Columbia University who draws the attention of new literature student Allen Ginsberg (Daniel Radcliffe). Ginsberg isn’t afraid to challenge his lecturer on great writing but when it comes to friends he is rather impressionable and soon becomes mesmerised by Lucien and his gang of drug addled eccentrics. Ginsberg becomes one of the gang and they enjoy intellectual discussions on Yeats and other great writers until they decide to come up with their own manifesto, the New Vision. Enthralled by this creative and vibrant world Ginsberg begins to fall in love with Lucien, a complex individual who insists he is not gay despite giving the impression of such. As Ginsberg becomes inspired by his new friends, including William Burroughs (Ben Foster) and Jack Kerouac (Jack Huston), a murder occurs that challenges the group but also brings together the future writers of the Beat Generation.

Stylistically, Kill Your Darlings is interesting, choosing to depict the hallucinatory drugs the writers take with the aid of tableau and actions sped up, reversed and slowed down. There is some good humour and the film has a free moving fast pace echoing the spirit of the youth it is depicting. Montages show the characters high on Benzedrine, ripping up books, jerking off and of course writing. The surreal and stylised scenes do help to make the writing process far more screen friendly.

This is a film about young people made for young people and it will certainly appeal to a new generation, making the Beat movement accessible. Radcliffe is believable as a young Ginsberg and proves yet again that he is a capable actor, making Ginsberg young and susceptible, but lacking the presence that James Franco gave him in Howl (2010). It is, however, the charismatic screen presence of DeHaan that really stands out. Channelling, and looking a lot like, a young DiCaprio, he is a whirlwind of grand ideas, bravado and vulnerability. Jack Huston depicts Kerouac as a charming ladies’ man with a soft side for his cat and Ben Foster is brilliant as the inebriated yet sharp-eyed Burroughs. Supporting roles from the brilliant Michael C. Hall and Elizabeth Olsen strengthen the film and introduce other aspects to the story, which are a little too brief in parts and not altogether explained, and Jennifer Jason Leigh is fantastic as the mentally ill mother of Allen, projecting a wealth of sadness and pain in such a small role.

Upon starring in this film Daniel Radcliffe stated that he wanted “to show people I am an actor and not a character”. Director John Krokidas spoke of how he didn’t want it to be another stodgy biopic and instead he wanted to make it fast, young and unique. He also discussed how he is aware of the cliché of smoking and writing and so that’s why they did “smoking, writing and jerking off” and everything else you see. Radcliffe claimed he was “free to experiment and play around with the performance “and the “main challenge for me was the accent and getting the voice right”. They used a lot of different acting techniques during the process, including Meisner, and Radcliffe started on the accent with the director two months before shooting began. The film was made in a mere 24 days, spending approximately 3 hours on each scene and one a brief 12 minutes, as they were being shut down by Columbia University. 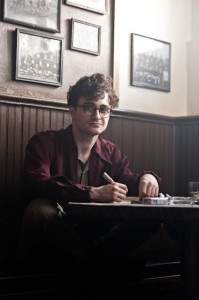 This is a well-known period in literary history and the writers are very familiar in film, with the release of Kerouac’s On the Road (2012) earlier this year, but the director has successfully injected new life into a familiar story and cleverly added a mysterious murder to give the film a new focus later on. This latter part does feel slightly rushed though, but overall, the film is enjoyable and will be inspiring to the younger generation. Having Radcliffe on board will no doubt attract a large audience and enable the spirit of Beat to continue.