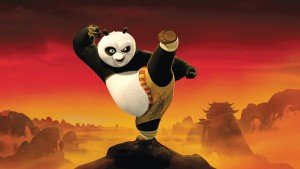 Kung Fu Panda has a lot going for it. There’s the great vocal cast (Jack Black plays Po, the titular panda while we also get the likes of Dustin Hoffman, Angelina Jolie, Ian McShane, Jackie Chan, Seth Rogen and Lucy Liu to name more than a few), the eye-pleasing animation and the wonderful moments that evoke great martial arts moments we have seen before, albeit performed by real people.

The plot sees Po a little down as he helps out at his father’s restaurant, selling and eating plenty of noodles. But Po has a dream, he hopes to be a legendary kung fu warrior one day and to join the Furious Five (Tigress, Mantis, Viper, Monkey and Crane). And, due to a twist of fate and some fireworks, it looks like that dream may happen. Or not. With his dream almost within reach (and a big baddie to be stopped), Po finds himself laughed at and written off by most of those around him.

Nothing new here then. It’s all about self-belief, reaching for your dreams, etc, etc. We’ve seen it many times before.

But it’s all so well executed that unoriginality hardly matters here. What does matter is the warm and witty script (perhaps not full of belly laughs but certainly consistently amusing), the lush visuals and the rather fantastic action sequences. Hell, there’s even a fight over a dumpling that reminded me of some other classic movie moments I have enjoyed in the action genre.

I may be giving people too much credit here but it certainly feels as if everyone involved wanted to craft a great, loved, enjoyable movie that would please children and adults alike, placing great characters alongside some moments of chop-socky greatness. Fantastic stuff.

A fun sequel to a fun kid’s movie, Kung Fu Panda 2 doesn’t need to do all that much to be a success but it certainly tries hard enough to give the kids the same stuff that they enjoyed the first time around without being a soulless rehash.

Starting with a nice shadow-puppet theatre style (rendered with some lovely animation that conveys a very basic 2-D style), we are told the story of a peacock who realised that fire could be used to make a terrible weapon. After being told by a soothsayer that he will be stopped by a black and white warrior he goes out on a mission to destroy all pandas. Move forward many years and we’re once again in the company of the furry, wobbly warrior panda Po (voiced by Jack Black). The bad peacock has, apparently, a weapon that will destroy kung fu and it is up to Po and The Furious Five to try and stop him. While this is going on there are also two other important story strands – one has Po being advised to find inner peace, a way to become an even greater warrior, while the other has Po struggling to unearth some repressed memories that are bubbling just below the surface of his mind – that connect with each other and intertwine with the main tale, providing some meat on the bones.

Kung Fu Panda 2 may not be a great film but it certainly provides a template for how to make a sequel to a successful animated movie. The first 10 minutes or so set up the story and then the laughs begin to trickle, even if they never end up being BIG laughs, before the action starts up. And it has to be said that, like it’s predecessor, those action sequences are pretty great. The animated medium allows for a mix of zany moves, smooth editing, grand stunts and physicality that can either stay grounded and pack a real punch or break the rules and go for sheer entertainment value.

Directed by Jennifer Yuh, and written by Jonathan Aibel and Glenn Berger with some story work credited to Robert Koo, the big plus here (quite rightly, for an animated film) is the look of the thing. Wonderfully evocative of the bounteous beauty that China has to offer, the film works with bright colours and can make you feel as if you’ve been wrapped in a gorgeous, silky cocoon of Chinese fabric.

A few highlights include scenes featuring a baby Po, a hilarious sequence involving our panda hero in “stealth mode” and a finale that is as hugely entertaining as it is rather predictable. It’s pretty perfect family fare with characters that kids can identify with (Po is just a big kid who doesn’t like to exercise a lot and is a bit clumsy – what youngster can’t empathise with that?) and enough going on to amuse parents for 90 minutes.

To makes sure that I had a balanced perspective on things, and to ensure a smily little girl, I took my daughter (Sadie) along to see Kung Fu Panda 2 and to then get her views on the movie afterward. Sadie is 6 and 3/4 and edges into the target audience so let me just finish here with quotes from our youngest guest reviewer regarding the latest adventures of Po and the gang.

Sadie said: “I thought it was awesome, really funny and nice to look at. If I had to mark it out of 10 I’d give it 1000 out of 1000. My favourite characters were Po and Viper because Po is silly and Viper always manages to help the Furious Five with stretchy moves and is cool. Mantis is funny too.
The only thing I didn’t like was the evil peacock because he was a baddie but everything else was brilliant and I’d definitely want to see a Kung Fu Panda 3“.

So there you have it. The paraphrasing is mine but that sums up Sadie’s feelings towards the film. She loved it and she didn’t like the baddie because he was bad (so job done well on that front, methinks). I have scaled her rating of 1000 out of 1000 to place it here as . . . .