Eddie Marsan has, not-so-slowly and surely, become a solid favourite from the current stable of excellent British thespians. He can do almost anything. Just witness his performances in Filth, Tyrannosaur, The World’s End and Miami Vice to see a sample of his versatility. So when he gets the main role in a movie I tend to be excited.

Still Life is a beautiful film, in a number of ways. First of all, the main character (John May, played by Marsan) is a beautiful soul. He’s a council worker who tries to seek out relatives/loved ones of anyone who died alone. If he is unsuccessful in his job then he sets up the funeral, writes what he considers a suitable eulogy after finding out as much as he can about the deceased, and then attends the funeral himself. It’s also a beautiful film in the simple shot composition. John keeps his life very simple and neat, and that is reflected for almost every moment that he’s onscreen. Last, but not least, it’s a beautiful film for the message it puts across, as it (in the form of John) tries to prove that physical death isn’t the end of how someone’s life can affect you. 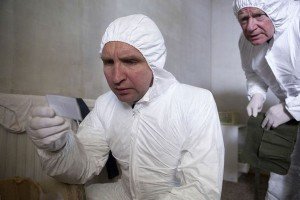 Writer-director Uberto Pasolini takes his time to show the care taken by his main character as items are looked over and a picture is put together of the recently deceased. A dented pillow, finger-shaped scoops removed from a tub of moisturising cream, a collection of vinyl albums, various photographs. All of those things can allow people to think of life while making funeral arrangements, and the film shows this with a patient, gentle touch.

With each delicate stroke, this paints something very sweet and moving indeed. It may seem a bit too quirky for its own good at times, I guess, but it earns every scene. Technical work aside, Marsan is one of the big plus points. He puts in yet another perfect performance, easily showing everyone why he should be getting more lead roles. Joanne Froggatt, Karen Drury, Andrew Buchan and a few other people do appear onscreen, but it’s Marsan who carries the entire movie on his shoulders, in almost every scene, and he’s more than up to the task.

Undeniably too measured and sedate for some, Still Life is a bittersweet reminder to live your life to the fullest. It’s a familiar message, although this time it is relayed in a wonderful, unique way. With added Eddie Marsan greatness to sweeten the deal. Give it a watch and see if you can be as won over by it as I was.

10 Harry Potter Quotes to Live Your Life By