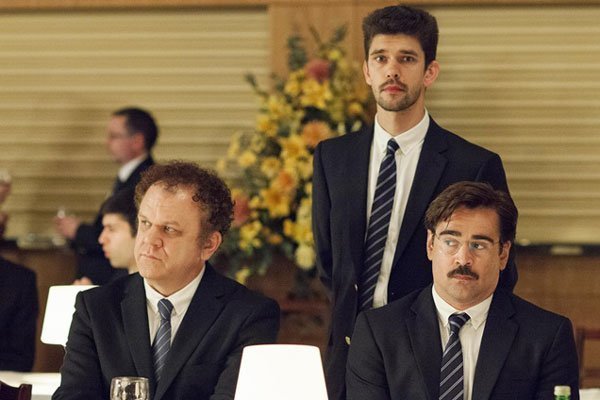 If you could turn into any animal, what would you choose? An academic question where we come from, in Greek director Yorgos Lanthimos’ universe it’s a practical matter requiring careful consideration. In his surreal dystopian romantic satire, also his English language debut, it’s the final punishment facing anyone who fails to find an acceptable mate. Dazzlingly funny in its exploration of a binary world allowing little personal freedom, The Lobster leaves quite the impression despite fading in the second half.

In this world, everyone has to be married, apparently to a partner with a matching distinguishing feature. This could be incessant nose bleeds, a limp or shared cruelty. If you fail to find a partner, or your existing one dies, you get sent to a hotel run by Olivia Colman where you have several weeks to couple up with another inhabitant or risk getting turned into a creature of your choosing. This is the fate facing Colin Farrell’s David (he’d pick a lobster hence the title) after his wife dies.

There is an existence outside, and it’s equally harsh. Living free in the woods are the loners, escapees who reject the system. Hotel guests go on regular hunts, and every loner they catch grants them an extra day of safety. It’s here David flees when even his survival instinct can’t stomach staying with the partner he reluctantly chooses. Except the loners have a code as well; no romantic interaction of any kind, which is a problem when he finds his fellow short-sighted soul mate Rachel Weisz under the trees. The rules are enforced robustly by a scarily passive Léa Seydoux.

The magic starts to disappear out in the woods. There are still flashes – an inspired silent disco –but it feels like Lanthimos and co-writer Efthimis Filippou no longer know where to take the idea. The world they create is vividly real, filled with just enough detail to give the impression of more. The same cannot be said of the people in it. The performances are top notch, particularly Farrell who again proves that offbeat comedy really is his forte, but they remain static. Weisz is a great unknown hanging on the edge of David’s life, there to expose the flaws in this new system without feeling like a real person. Even David moves no further than we first find him. With the people in this wickedly funny dystopia lacking substance, the story winds down.

The first half is a marvel, one of the oddest, funniest films I’ve seen in some time. It then doesn’t know when to quit, pushing on eagerly without the weight to back up later digressions. A slight air of frustration hangs over The Lobster as a result. That it manages to juggle arthouse pretension and unabashed fun for so long is a massive credit to Lanthimos, who confirms his position at the forefront of innovative and exciting cinema. He drops the balls eventually but what a trick it is.