Lone Survivor depicts an American operation in Afghanistan that went badly awry. This gung-ho memoir of one man’s actual experience is notable for its realism of physical detail. It tells a war story of soldiers who die honourably in battle. In other aspects than the pure physicality of that battle, however, it disappoints. Moviegoers deserve more than a battle, however accurate and however brave. And anyway, in some key aspects physical events have been altered, denting the accuracy.*

The survivor is Marcus Luttrell, whose book this is based on. Book and film tell how four Navy SEALs dropped into the mountains to eliminate an enemy leader are surrounded and outnumbered something like six or eight to one. Or is it ten or twenty or fifty to one? It all happens amid trees and rocks on a mountainous hillside, and we can’t really tell. The SEALs’ communications don’t work adequately, not even an insecure “sat” phone. And the “Tali” — the Taliban — are not lacking in fire power — machine guns, AK-47s, RPGs and mortars — and are at ease with the terrain. The Americans become all bloody and wounded while the Afghans, when seen, remain fresh-faced, unblemished. They quickly shoot down a helicopter sent to retrieve the endangered Americans, killing, of course, everyone on board and forcing a second helicopter to retreat and leave the men stranded. 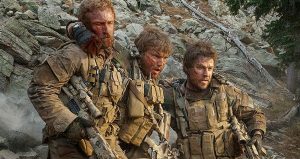 The story is not without framing material, but that’s where the trouble comes. It begins with a rah-rah montage portrait of SEALs training. Then it moves to the men at Bagram base, the rookie eager to be chosen, the future bride’s request for the expensive gift of an Arabian horse. After the battle there are scenes of the titular survivor’s protection by friendly locals, the enemy invasion of their village, the Americans’ big counter invasion and Luttrell’s rescue. Around it all hovers a moody poetic voiceover in blatant imitation of Terrence Malick. Using the most up-to-date special effects and makeup, Peter Berg delivers the action from the book with brutal accuracy as to the grim minute-to-minute combat. But the derivative, simplistic, overly gung-ho and sentimental surrounding elements reveal that while Berg is great at action, he lacks style and objectivity.

It’s hard to see sometimes what’s blunt new realism and what’s simply blindness to subtlety. All the men, even the junior commander back at base played by Eric Bana, are so burly and bearded it’s hard to tell them apart, but to begin with they were not chosen to be distinguishable, had they been shaven. There’s just not the usual effort to give the characters individual personalities.

The Afghans are seen as colorful people, Middle Eastern types in elegant robes and scarves whose language is presented as meaningless, except very briefly when Marcus (Wahlberg) is being cared for, when some subtitles are provided. We’d surely like to know what one man says, a goatherd running away from the SEALs. Bring an Afghan to the cinema with you if you want the translation.

There’s no time given to ironies. But the pivotal one is how unprepared these ultra-qualified fighting machines are when three lone goatherds wander up. They are an old man, a visibly furious young adult, and a boy, with their animals. The SEALs seize them and hold them at gunpoint. They debate killing them or tying them up. But they opt for the rules of engagement. They simply let them go. Maybe this was the right thing, but for the SEALs’ safety and the success of their mission it’s a fatal error. Already they’ve seen there are more men at the enemy leader’s base than they’d expected. The angry young adult runs and leaps like a goat down the steep rocky hillside to tip off the enemy. The SEALs are fucked.

The story reveals this big tactical mistake, but of course it fails to take into account questionable aspects of the whole Afghan war. Sure, that’s not Peter Berg’s subject or the topic of the account this movie is based on. But this could have been a richer and more complex story. Even though Hetherington and Junger’s well-made, risk-taking documentary Restrepo seemed to me to approach too much with blinders on, as “embedded” journalism, it did show what a mess the relations between the American forces and the locals were in Afghanistan. But this film doesn’t go that far. There’s the Hallmark card cuteness and sweetness of the “nice” Afghans who care for Marcus on the one hand, and the bad-guy blankness of the Taliban fighters on the other hand with no grey areas or specifics in-between.

The distinctive accomplishment, not to be overlooked, is that the hardcore action meat of this movie is vivid and specific, way more like being there than you ever likely to have expected. It is particularly hard to watch the four men, already exhausted and badly wounded, twice rolling and tumbling down the steep jagged hillside, their bodies bashing, turning, and bumping into rocks and trees. It’s hard to believe these free falls would not in themselves kill or at least maim and disable them. But no. They go on, with fingers shot off, bullets in the head, sucking chest wounds and shrapnel in the leg, all depicted with admirable specificity and vividness and endured with exceptional bravery.  But it’s wrong to jump from being shaken up to thinking this is a good film.

Soldiers don’t think. During the fighting they goad each other on, as they should. It’s their job to fight to their last breath. We see one man literally do that. This is Matt ‘Axe’ Axelson (Ben Foster). At that point Danny Dietz (Emile Hersch) is already gone. And up above them the team officer, Lt. Michael Murphy (Taylor Kitsch) who has climbed up to try to send a call for help, has been followed and shot in the back.

What happens is so exhausting and awful you’d think this would carry a powerful antiwar message, like the 1959 German film The Bridge (Die Brücke,) which in some ways it resembles. But at the end Lone Survivor, it turns out, is just a tribute dedicated “to the brave men of Operation Red Wings.” So there’s no larger context, in a sense no thought. But of course, soldiers don’t think. Some of us do though.

*As a Slate article shows, the film departs in certain important details from the actual events, including who conceived the operation (the Marines, not Navy), the number of enemy fighters (considerably fewer, though the Americans were outnumbered), and the nature of the rescue operation; and Luttrell’s memoir departs from fact at some points too.