If you’re afraid of sharks, drowning or the sea then All Is Lost might not be the film for you. Having said that, it’s definitely a film that should be seen, preferably on a massive screen with an amazing sound system. Robert Redford, the sole cast member, plays an able sailor who, whilst on a voyage in the middle of the Indian Ocean, wakes up to find his yacht has collided with a stray shipping container. As water seeps in through the side of the boat, he detaches himself and sails away. This is just the first in a series of events that force him to face the very real possibility of his death. 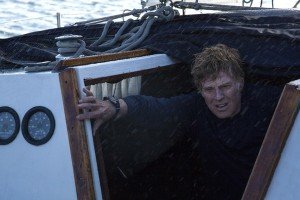 This is the kind of film where your fists are always clenched, you’re on the edge of your seat and a lot of the time, breathing isn’t an option. There’s barely any dialogue, just a few sentences at the beginning and some shouts from Redford throughout. Otherwise, there’s the brilliant minimal soundtrack and the sounds of the sea and the yacht. It’s an immersive experience and Redford gives a wonderful performance as the character simply named Our Man. As he tries to fix the boat and his situation, you can’t help but root for him. It’s amazing how much sympathy is warranted from a character who says about fifteen words in just under two hours, but with his radio broken and no one around to help, the film soon becomes a nightmare (well, mine at least). You’re simply watching one man struggle to survive against nature and with all his luck run out. It’s shocking, heartbreaking and exhausting to watch. One scene in particular, just before he abandons ship, is horribly tense. As he tries to salvage bits and pieces from his now wrecked yacht, the creaks and moans from the boat suggest something worse is about to happen and it’s hard to restrain from shouting “GET OFF THE DAMN BOAT” at the screen. 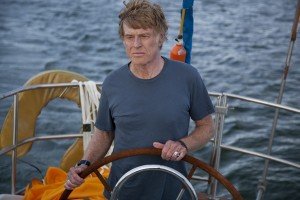 This is relentless filmmaking and will leave you feeling as though you’ve been drowned. The natural soundtrack is excellent and ensures dialogue isn’t necessary. Just hearing a rumble of thunder sends anxiety through the audience and one look from Redford says all that needs to be said. It’s an incredible performance, from both Redford and his surroundings. The ambiguity of the ending adds a lot to the film as a whole, and will prove a great debate starter among audiences. This isn’t a relaxing film, it’s not an easy film either, but it’s a must see and one of the most interesting films of the London Film Festival so far. 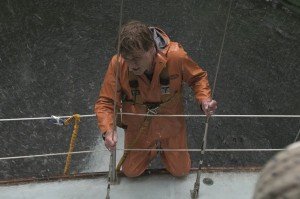