Only Lovers Left Alive is the first Jim Jarmusch film I have seen in a very long time. Come to think of it, it may even have been the only one since his 1984 big moment with Stranger Than Paradise and I sincerely believe that not having allowed myself or having made at least an effort over the years to try to warm to Jarmusch’s other work has probably affected my views on his latest film. I almost feel it should not have been me to write this review and that I do him gross injustice doing so: I am sure that Jarmusch’s cult following could vilify me and would disagree on most of what I am going to say below but I found it really difficult to cut him some slack on his version of what I think has, by now, become a very tedious and overexposed genre: the vampire film. With a cast like Tilda Swinton, Tom Hiddleston, John Hurt and Mia Wasikowska this looked promising on paper and of course with Jim Jarmusch being who he is this was not going to be any straightforward vampire film by any standard (even I, a relative non-connoisseur of his work, knew that) but for me the film failed to deliver on many of its promises, the acting not being one of them I hasten to add.

I think with Jim Jarmusch it is all a matter of whether you like and warm to his way of story-telling (or should I say the lack of just that). Knowing Jarmusch as little as I do, I felt that to do him any level of justice in writing this review, I should at least familiarise myself a little bit more with who he is and what characterises his work. A good many of you may think that that is not the right attitude to writing a film review: you like the work you are reviewing or you don’t, for whatever reason, but you need to judge it as a product on its own merits and not see it in the context and against the background of that person’s other work. Anyway, without wanting to lose myself here into an expose on the art of writing film reviews, I have decided to take a more, what I would refer to here as a contextual view on writing a film review.

So where does that leave me with Only Lovers Left Alive? Well, for a start in understanding that his films intentionally stay away from traditionally narrative structures, are more about focusing on mood and character development and don’t always have a clear plot progression: it’s less about plot than it is about mood and feeling and I think it is fair to say that Only Lovers Left Alive does that. Almost fully set in the dead of night it is effortlessly cool and oozes atmosphere, particularly through the indulgent cinematography (by Yorick le Saux), showing the disintegration of a desolate Detroit and the dark alleyways of Tangier where most of the film was shot but also in presenting us his decadent main characters: Eve (Tilda Swinton), icy, bloodthirsty and very smart and sophisticated (in the brains as well as the looks department) and Adam (Tom Hiddleston), dark, bohemian, moody and Byronic in looks, both off-set against the wild and outgoing Ava, Eve’s reckless and at times irritating little sister.

The film tells us the story of Adam and Eve (I know, he could have given his main characters some different names or is it that we were expected to believe that we were dealing with the first human beings?), two vampires who have lived their lives through the centuries with such friends as Schubert (for whom, we are told, Adam once wrote an Adagio), Shelley and Lord Byron. They are the eternal outsiders and live on the fringes of society, safely withdrawn from the “zombies”, the normal human beings whose contaminated and unpure blood they need to stay away from as much as possible and who have turned out to be such a disappointment as a species. Their constant namedropping needs to make us aware how they have rubbed shoulders with the historic greats of this planet and how they now spend their idle days in a society, devoid of geniuses and on a constant quest for premium blood, some supplied by the local hospital doctor. Half way through the film Adam and Eve are visited by Eve’s sister Ava from Los Angeles, whose reckless ways as a vampire – she is far less choosy in the quality of blood she can get her hands on – causes some disruption in the couple’s tranquil domestic situation but equally gives an, up to that point, very languid and slow film a bit of a much-needed kick. 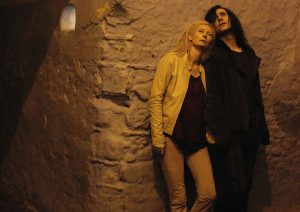 There is much that is good about the film: the story of these sensitive, sophisticated and über cool vampires who have hung out with the cultural elite of their day but have now entered an age of steady erosion and decline of a once rich Western culture which is no longer able to live up to their standards, is in itself an interesting one and visually overwhelmingly presented through some stunning locations in Detroit, a metaphor for the decay and decline of a once thriving culture. The dialogue is at times sharp and funny but it all goes wrong when it becomes too pompous, pretentious and full of not very subtle references to the past with an annoyingly high level of namedropping and smugness. That’s where the script not only lets the viewer down but equally a great cast with lots of potential. The film becomes a bit silly and loses itself towards the end into a, dare I say, very disappointing and uninspiring final act. So all in all a film which is very pleasant on the eye and ear but suffers from a lack of ideas which all the coolness in the world is unable to cover up.

Only Lovers Left Alive is in cinemas 21st February 2014.

David Hess Dies At The Age Of 69