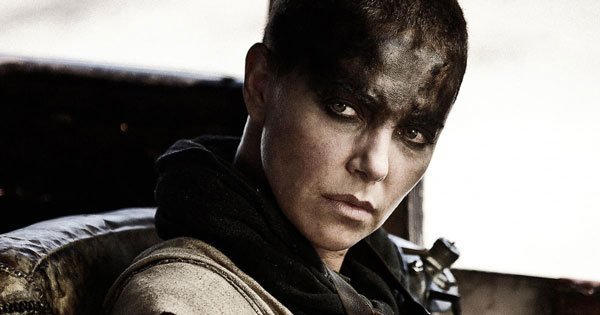 In 1985, apparently sending George Miller’s Mad Max franchise to the hereafter, Tina Turner sang “we don’t need another hero”. Thirty years later, Miller has had a change of heart. Mad Max is back, with another hero, and she’s called Furiosa.

Mad Max: Fury Road is set on a huge featureless, arid, salted, dead plain (Namibia doubles for Australia; ironically the deserts around Melbourne which located the original Mad Max look a bit green these days), 45 years after “the fall of the world”. We are told “the future is the road”, yet there don’t seem to be any roads; just tracks in the sand. Nor is there water or vegetation, and the only food on offer in the 2 hour running time is a single two-headed mutant lizard, consumed in the opening scene, and an underweight cockroach, consumed at the end.

Yet life persists: the desert teems with angry bogans driving monstrous contraptions housing supercharged V8s. What they eat and drink, and where on earth they get refined gasoline half a century after the apocalypse is anyone’s guess, but they sure as hell blow through the stuff. Actually, they do tell you: they get it from Gas Town. Munitions – also gleefully expended – hail (ahem) from Bullet Farm, it taking more than nuclear holocaust for Australians to kick their habit of unimaginative place names.

So this tale starts out as a rather grand voyage to go and fill up the car; a matter of great excitement at the Citadel. Imperator Furiosa (Charlize Theron) is the tanker (sorry: War Rig) driver sent out to get it. She has only one arm, a crew cut and a faraway look in her eyes. Instead of eye-shadow she has smeared her forehead with engine grease.

And she’s, like, a woman; seemingly the only one in the Citadel not in some kind of indentured breeding programme. This might lend Mad Max some post-feminist grrl power credentials, though what you’d be doing even looking for them in a movie whose conceptual scheme is basically Grand Theft Auto Goes to the Desert is hard to say. It’s also moot whether one should bother about logical inconsistencies or continuity errors in a film which is basically predicated on them, but Furiosa’s tanker is already full of gasoline when she sets off.

As convention dictates, Furiosa goes rogue. She turns east. She has stolen five fecund foxes from under the nose of the Citadel’s chief warlord Immortan (sic) Joe. Joe, who wants them as breeders, saddles up his baddest tricked-out bogan desert sleds (they really are impressive if you go in for that kind of thing) and a zombie thrash-metal guitarist strapped to a mobile public address system and, with a bevy of anaemic “War Boys”, chases Furiosa and her chicks across the desert for an hour.

I hope you won’t consider your experience spoiled if I tell you they then turn around and get chased back, for the remainder of the film’s running time.

Now you might have noticed someone missing from the synopsis to date. Isn’t this film about a mad bloke called Max? Well; yes and no. Having been captured by the Citadel in the opening sequence, Max Rockatansky (Tom Hardy) is there, along for the ride. On the way out, literally: strapped to the bonnet of a chasing vehicle like a living figurehead, intravenously feeding his blood to War Boy Nux (Nicholas Hoult) as he drives it.

Once he unhooks from that, he hooks up with Furiosa and her kidnapped harem, and rides shotgun back, fixing engines, opening stiff jam-jar lids, wasting War Boys, and generally helping out around the house a bit like Schneider used to in One Day at a Time. But he doesn’t have much to do or say. Mad Max: Fury Road is no more about Max than it is about a road: in the alternative (surely apocalyptic) universe where this film garnered academy award nominations, Max’s performance would only qualify in the supporting actor category.

So it is Furiosa, not Max, who is the heart and soul of this two hour marathon of stunts, explosions, noise and stunning truck-bound production design. All that’s missing is blood, gore, nudity, bad language and a sense of humour. And, maybe, Tina Turner.