Home invasion horror films over the years have been usually identified by a couple of common factors, namely a very low budget, a penchant for brutality and a subtext normally drawn along the lines of race (Larry Cohen’s Bone) or class (Wes Craven’s Last House on the Left, and many others), sometimes both. Some are about abstract cold revenge and others are about settling personal scores. In many ways it is a genre that has been through the rinser a few times over now and even the re-issue of classic nasties of their kind (Roger Watkins’ Last House on Dead End Street and the legendary Ruggero Deodato’s House on the Edge of the Park) only leave one with the feeling that there’s not much else to be said about indigent madmen terrorising lonely women in large houses.

It says something then about The Man In The Orange Jacket that it is able to not only find new ways of twisting the original and well-worn tropes into something recognisably genre yet artistically new, but also to do so in a way that is both startlingly original and technically and structurally interesting.

The Man In The Orange Jacket, written and directed by Aik Karapetian, tells us a story of revenge and violence, guilt and paranoia; doing a fantastic job of delivering a visual representation of gradual mental break-down and violence-induced seizures, doing all of this in a way that is both beautiful to look at and rather unpleasant to look at.

Maxim Lazarev plays Dan, a dock worker who, we find out in the first few, beautifully composed widescreen shots of the film, has been laid off from his job, along with a few hundred others. Without a source of income and with a sense of injustice and burning rage, Dan makes his way to his former boss’ comedically large mansion in order that he exact some sort of terror on the man responsible for destroying his livelihood. Whereas most films of this kind would spend a long time setting up and exploring Dan’s break-in and eventual revenge, The Man In The Orange Jacket has different concerns. Over the course of a few brutal minutes, Dan makes his way to the home-owner’s bedroom and does him in in a very bloody fashion, moving on very swiftly to the man’s trophy wife who meets the same fate. Dan then proceeds to assume the man’s identity and spends his time partaking of all the good things in life he never had and, since his sacking, may never have had. He goes to the finest restaurants, he drives the smartest cars, he potters about in a gown and lives the high life. He even uses his new-found money and power on a couple of prostitutes he treats in much the same way we assume he has been treated in his job. He gradually begins to turn into his boss.

It is here that things begin to fall apart for Dan. He is haunted by strange sounds, he sees a man, much like himself, dressed in the same way and carrying the same toolbox, looking at him from a distance and always, we feel, the threat of retribution hangs in the air. Is the revenger about to fall victim to the machinations of the revenger? Are they one and the same person? These are all questions that lurk at the back of the film like the man in the orange jacket lurking in the shadows, and when they are answered, if indeed they are answered, they are done in a way that, like Dan’s mind, make us not really sure which way is up; only that something is very wrong and that violence seems the only way to answer violence, even when it is self-defeating. It makes sense then that even violence seems unable to bring us a conclusion, and the conclusion is not only open, but perfectly sensible. it is a paradox that the film handles well. 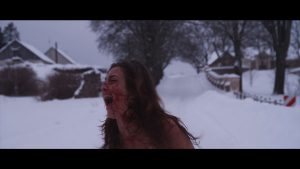 The Man In The Orange Jacket looks fantastic. Shot, once again like so many films at this year’s festival, on a combination of Red cameras (in this case the Epic and the One) in glorious widescreen, the images are starkly detailed, every nuance of the background is sharp and focussed, every drop of blood glistens and the depth of the images (figures in the shadows are obfuscated yet all too clearly drawn, the orange of the titular jacket stands out like a beacon in the gloom) is astonishing. This is use of digital of the highest order. Like most horror films, certain conventions are followed and the visuals give these all the more power. Victims hurry and scurry and claw and thrash, assailants move in slow-motion, and the slow-motion on the Red is so clear and so steady that the effect is strengthened immensely.

Add to this a soundtrack that veers seamlessly between jarring avant garde strings (which lends the action a manipulative, choreographed style and an emotional tension that is fantastic) and opera (an aria from Lakme played over one of the final violent outbreaks is stunning in its effect) and we have that rare beast in the world of horror cinema: something that approaches a work of art.

And unlike von Trier’s films, The Man In The Orange Jacket does not outstay its welcome. It is only 71 minutes long (oddly, many films at this year’s Festival don’t go beyond 80 minutes) but it uses all of those 71 minutes to tell its story and reach its conclusion with no remainder and no excess. The Man In The Orange Jacket is not perfect though. In places the action becomes a little obtuse and Karapetian does seem overly enamoured with the Red’s ability to clarify the darkness, but these are minor, easily overlooked quibbles.

All in all then, The Man In The Orange Jacket is a fantastic piece of intra-genre filmmaking. It is brutal, it is aware and it is amazing in its execution. And though the violence of the film and its unpleasant tone may deter the average movie-goer, it would be a mistake to miss out on what is an incredibly accomplished piece of cinema.

‘Sound Bite’ Of The Week…Westworld Season 2