Monuments Men is a well-meaning but lame vanity project from George Clooney, who wrote, directed, and stars in it. For this true but dumbed-down tale of mostly middle-aged American scholars and art authorities who were sent to save Europe’s art from being plundered by the Nazis, Clooney gathered a cast of famous and popular actors, including Matt Damon, John Goodman, Bill Murray, Jean Dujardin, Bob Balaban, and Cate Blanchett. This is a story too complicated and diffuse for a thriller. It’s been told better in a documentary, The Rape of Europa. It’s a well intentioned flop, riding on the wave of a zillion better World War II movies. Think of Tarantino’s Inglourious Basterds. It’s not that. Think of Soderbergh’s Oceans movies. It’s not them.

The scenes feel detached from each other. They often begin with dialogue that seems to be introducing the film — again. One unifying thread is the search for Michelangelo’s “Madonna of Bruges,” but a lot more is going on, and though we see that the group discovered some huge Nazi caches of stolen European art from museums and Jewish private collections, it’s not really very clear how they managed this with what appears to be only a handful of men. The assistance and coordination involved are left too vague.

There are some scenes that might be thrilling if Tarantino wrote and staged them. In one in particular, some of the men are sitting around a table in Germany with a “farmer” who had been in the SS, in Paris. They slowly realise that he is hiding, that he was the chief agent for Hermann Göring’s major thefts of art from the City of Light. Since this is Germany and the Germans have not yet surrendered, the scene feels dangerous for a minute. But Bill Murray has the pistol. And the scene is abruptly cut off. Tarentino would have dragged it out, to our excruciating pleasure. There is too little pleasure or intensity here.

Two members of the little group lose their lives. They are a drunken Brit (Hugh Bonneville) whom Clooney’s character has rescued from life in a shambles and allows to achieve a certain nobility, dying as he tries to save the “Madonna of Bruges.” The French member of the group, played by Jean Dujardin, another symbolic good old boy from abroad, is shot and dies after he and his cohort (John Goodman) take the wrong road and run into a squadron of armed Germans hiding in the woods. In a mine full of hidden art Matt Damon steps on a land mine. Clooney confronts an arrogant concentration camp boss after the Germans have surrendered, another potentially Tarantino moment, but it turns into a little homily about how not being himself Jewish doesn’t mean he supports the Holocaust because he’s going back to eat breakfast bagels at a Jewish deli on the Upper West Side. Clooney wants to lecture us. He’s “telling” when he should be “showing.” These scenes, lacking a tight unifying narrative, fizzle like Matt Damon’s land mine.

The jokes, mostly about unequal ranks and old men in uniforms, aren’t very funny either. Then there is the peculiar case of Cate Blanchett, at her most prissy as an uptight French woman at the Jeu de Paume in Paris when Hermann Göring’s agents are shipping out its art wholesale. Her brother is in the French resistance, and she may be too. She won’t cooperate fully with the Nazis, nor, for a while, with the Americans. She won’t smile either, till April comes and she wants to go to bed with Matt Damon. He’s not interested, and we’re not surprised. Kristen Scott Thomas might have put some spunk and complexity into this role, but it would still be a thread that leads nowhere.

For some reason, perhaps because they’ve been simplified in this “Rescue of Stolen Art for Dummies,” the characters don’t have real people’s names, even though they vaguely represent real people. Frank Stokes (George Clooney) was really George Leslie Stout; Preston Savitz (Bob Balaban) was really Lincoln Kirsten. Richard Campbell (Bill Murray) is a composite of several Monuments Men including architect Robert Kelley Posey. Campbell (Posey), in real life, was teamed up with Savitz (Kirsten), an odd coupling of a captain with a PFC, and here they’re assigned little comic routines. A young and Jewish member of the group is represented by English actor Dimitri Leonidas. His part is underwritten. 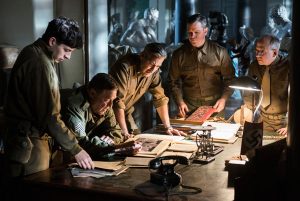 Everything is painstakingly spelled out. Clooney lectures FDR that “the greatest historical achievements known to man” are in danger of Nazi plundering. Power point scenes show that the thefts include great private Jewish collections like Rothchild’s. And that a giant “Führer Museum” was envisioned. Several power-point scenes illustrate the Allies’ ambivalence about bothering to save art at all — the US having destroyed some key historical cities — since winning the war and saving GI’s was the top priority. We’re assured that what the Monuments Men achieved was damned important nonetheless, a noble task that meant a great deal to them and to Europe.

Yes, what the Monuments Men did was damned important. Unfortunately, this is not a memorable, smart, or interesting way to present it. The screenplay was adapted from a book written by Robert M. Edsel, with Bret Witter, by Clooney with Grant Heslov, who among other projects directed another, worse, Clooney fizzle, Men Who Stare at Goats. File this with that one and Leatherheads.

The Monuments Men out in the UK Valentine’s Day.

Trailer Park: A Star is Born