I first heard of Derrick Comedy a few years ago when I stumbled across one of their youtube skits called Girls Are Not To Be Trusted, where a character named Kevin uses his film class and all of his classmates short flicks to exact revenge on his cheating girlfriend Melanie (“What the fuck Bellanie!?”) I was instantly a fan. Over the next few months, I’d anticipate new videos from the sketch comedy group and was surprised one day to find that a trailer had been released for a full length Derrick Comedy film. These guys had easily and often kept me entertained for six to seven minutes at a time with their shenanigans, but could their shtick self-sustain for an entire feature? After almost a year or so of waiting for my chance to see, I’m happy to say that yes, Mystery Team is a damn good flick.

The basic premise involves three life long friends who have grown up to be a trio of man-children pretending to be real-life detectives. They specialize in solving cases along the lines of “who stuck their finger in Mrs. Kimmel’s pie?” and are great at striking fear into the local kids on the playground. They always carry a trusty magnifying glass & slingshot on hand and seemingly have a disguise ready for almost any situation. 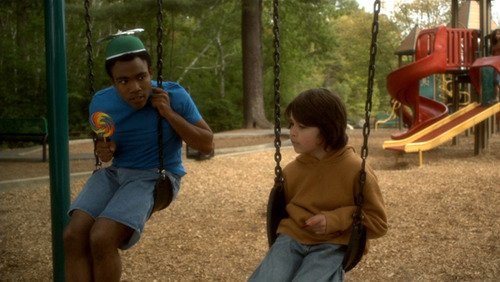 It’s not until a little girl shows up at their doorstep asking if they can help find the people responsible for murdering her parents that the Mystery Team are thrown into waters way out of their depth. Even though this is really a job for the police, they still accept believing that it’s just as simple as finding the clues and solving the case without reading comic books in bed (they’ll need their rest). An evening at a gentleman’s club, a botched drug-deal and a rough encounter with a stop-sign later, they realize that nothing is ever that easy.

The best way to describe what Derrick & co. have crafted here is an unconventionally conventional comedy. There’s enough puke, stripper shit and dog urine to satisfy the gross-out fans, but there’s also a real emphasis on character and a pretty sweet coming-of-age story skating on the surface. That’s not to say that this is a movie of which the likes you’ve never seen before (although, I’ve never heard a flick that actually contained a line like “You know, sometimes I really wish you didn’t beat that cancer.”) There is a standard movie formula at work here. Friendships will be challenged, compromises will be made and life lessons will be learned all before the credits roll – but what makes Mystery Team special is the way it operates within that formula. We’re given enough time to spend with these hopelessly clueless characters in order to be won over by them and enough good jokes to keep the flick moving at a decent click.

I caught Mystery Team at the Brattle theater in Cambridge, MA. where actor D.C. Pierson and producer Meggie McFadden were in attendance and gave a great Q&A. This flick was accepted to Sundance last year and is currently out on DVD.  I strongly urge people to make an effort to see this film. The boys from Derrick Comedy will be household names within the next decade, I’m certain of it. But for the time being, these guys have gone out and made a film with all the appeal of a mainstream Hollywood movie without having a well known cast or a big budget. This is exactly the type of movie that deserves to be supported. I took two trains and trekked through freezing cold weather to see it (not vying for sympathy, I asked people to make the same trip in October to see my own film The Darkness Within at this same theater). But I am glad that I made the effort and was not let down by the film – and neither will you. See this movie and support your local, independent film scene.

And don’t fuck the bread. Someone’s always gotta clean that up.