My colleague Michael Ewins yesterday told me he couldn’t find the words to describe his love for Nebraska, the latest film from Alexander Payne, so the job has fallen to me. Unfortunately, I’m suffering from the same affliction but I’ll give it a go…

So far, for me, this is the best film of London Film Festival. It is heartbreaking, poignant and hilarious and cannot fail to plaster a smile to rival the Cheshire Cat on your face. I’m smiling now just thinking about it. It’s the wonderful story of Woody Grant (Bruce Dern) who, convinced he’s won a million dollars, decides he will travel from Montana to Nebraska to collect his prize from Mega Sweepstakes Marketing. Woody’s exasperated wife Kate (June Squibb) is at the end of her tether, as are his sons Ross (Bob Odenkirk) and David (Will Forte). In the end, after failed attempts to convince his dad he hasn’t won anything, David puts Woody in his car and they head off to Nebraska, stopping by Woody’s old hometown along the way.

First of all, Nebraska looks gorgeous. Shot in black and white it has a slightly gothic feel to it and adds a lot of atmosphere to Hawthorne (Woody’s hometown) which is a rundown back road America town with not much going on. The decision to film in black and white seemed a bit gimicky at first but actually it works really well, especially during the travelling scenes and in Hawthorne. Woody is such a great character. He manages to make you laugh and break your heart in the space of five minutes with his confused wanderings and snide remarks at his sons. One of his funniest moments follows after David and Ross have stolen a compressor they thought was his. When he says it isn’t they ask why he didn’t say anything and why would they want a compressor for themselves, and he simply replies with, “Well that’s what I was wondering”. Moments like this are abundant throughout the film and make it a wonderful watch. The writing and the deliveries work together beautifully (see Kate’s line of the film, which I won’t reveal) to make Nebraska one of the best films I’ve seen this year. 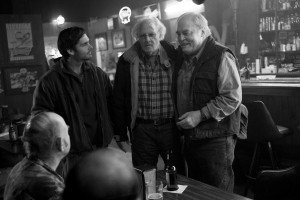 I can’t put into words how much I loved Nebraska. This review certainly doesn’t do it justice, and I’m still grinning like a nutter just thinking about it. Alexander Payne has made a film that is so close to perfection, actually it might just be perfect. There isn’t a moment that isn’t wonderful and it has one of the loveliest final scenes which doubles up as a gigantic “fuck you” to half the characters. It’s a brilliant moment and one which draws tears and laughter, breaks your heart and makes you smile. This is pure cinematic joy. Bravo, Mr Payne.