Following Sombra (Pedro Ferreira) through the streets of his Lisbon slum is a disorienting experience. He moves with the awkward swagger of an oddball teenager trying to fit in as he wanders through alleyways bathed in brief flashes of light, across imbricated rooftops and through ramshackle huts. It’s this glimpse of life that gives After the Night purpose, lifting Basil Da Cunha’s debut feature free from a conventional crime narrative that threatens to drag it down into the murky depths of the urban gangster film.

Sombra is the archetypal loner. Wedded to a solitary life in which he barely sees the sun, his days are spent sleeping in a messy hut with his pet iguana named Dragon. With one exception, he has no friends. When the movers and shakers in the neighbourhood gather round, Sombra can get no closer than the shadows ringing them. 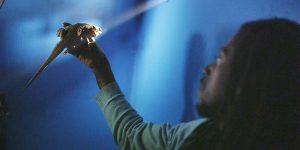 And yet life in such an enclosed space cannot be lived entirely alone. Behind on his payments to the local boss, Sombra is left to desperately chase up old debts from unwilling acquaintances. When he fails to put the money together, he’s forced to join the boss’s crew on a robbery that goes predictably wrong.

It’s the crime elements that let down an otherwise commendable attempt to explore life on the outside in Lisbon. The local gang is one we’ve seen a thousand times before with the chippy boss irritated by anyone who seems to question his authority, and a bunch of lackeys including a heavily muscled strongman who talks frequently about sex in the crudest possible terms. While the robbery, lit only by the protagonist’s torches, is effectively shot, the crime story seems little more than an attempt to ground an otherwise free floating film.

When Da Cunha returns to Sombra’s roving journey across the slum, his film comes back to life. He sprinkles in a series of colourful characters in encounters that take place in even more colourful settings. Walls are painted vivid greens and deep reds, characters wear bright tracksuits and shiny trainers. A warm orange glow spreads across much of the landscape at night, artificial lights spreading their unfiltered reach. 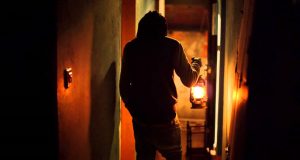 Sombra’s capacity to connect, stunted in most cases, flourishes with Dragon. On returning home to find his flat smashed up, his first and only thought is for the iguana’s safety. When forced to flee, he goes nowhere until he’s found a safe space for Dragon. Although going anywhere proves to be difficult. His world stretches as far as the edges of the slum. The threat of having to leave pushes him into a reckless journey through his old haunts, reaching a powerful conclusion.

There was no need for Da Cunha to pad out his film with the trappings of a gangster thriller. After the Night succeeds just fine as a journey into Sombra’s hidden world. Da Cunha’s illusory style shows a lot of promise, more than enough to suggest he need not compromise in the future.