In Order of Disappearance (Kraftidioten) 2014

“In Order of Disappearance” is not a memorable title for a movie, but it’s  a better one than “Prize Idiot”, which is the literal Norwegian translation of “Kraftidioten”. It is a film-maker’s in-joke, of course, and director Hans Petter Moland certainly has some fun with it as the credits roll.

Moland and his cast have quite a lot of fun throughout the film, in fact, which is not what you’d expect from a violent revenge thriller set in the arctic reaches of Norway.

Stellan Skarsgård is Nils Dickman, the snow-plough driver in the ski-resort of Beitostølen. When it comes to snowploughs they don’t do things by halves in the Arctic Circle, and Nils drives one big bastard of a snowplough. It can shift forty tons of snow an hour, and it throws it thirty five metres. It comes in handy, and no-one calls him names to his face. Indeed, despite his unfortunate surname (we are informed its Norwegian translation is “cock man”!) Nils’ position is of such utility in this community that he has been voted citizen of the year.

Nils’ (innocent) son is mixed up in a drug smuggling turf war and killed. When his wife walks out, her folded note containing no words at all, Nils forsakes his life of upstanding community service and sets about avenging the boy’s death. 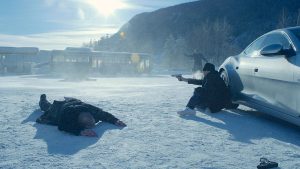 This involves picking off the lower order gangsters employed by Greven (Pål Sverre Hagen, chewing almost as much scenery as Nils’ snowplough) one by one – hence the order of disappearance. This is carried out in brutal fashion, but cut with mordant humour as dry and chill as the local weather. Things go swimmingly until Greven unwisely attributes Nils’ activity to a crew of local Serbians, who do not take kindly to their guy being strung up on an elevation sign on the highway out of town. Little was Greven to know that 1389 – the altitude displayed in the sign – happened to be the date of the Battle of Kosovo, in which the Ottomans routed the Serbians and enslaved their lands. Serbians, led by their Papa (the ever-wonderful Bruno Ganz) are not amused.

Cue bloody, but hilarious, mayhem. Skarsgård and Ganz are the only ones who play it entirely straight; the supporting cast has a riot. There is a glorious nod to Fargo in the final scene which rounds the tone nicely.

If I had a reservation it would be a purely commercial one: Moland would get a far wider global distribution were this film scripted largely in English: Skarsgård and Ganz both have easily enough of a following in the US for this film to rate interest there,  all Scandinavians in their home audience understand English perfectly well, and large parts of the film are subtitled in English (or Serbian) in any case.

In Order of Disappearance is in cinemas 12th September 2014.