It only took $11,000, a nice suburban San Diego home and a tried-and-true gimmick to craft last year’s sleeper, “Paranormal Activity” – a clever first person perspective, shaky-cam “home movie” that told a rather effective haunted house story. The inevitable sequel is hitting theaters a year later and unfortunately, it finds a way to fail in all the ways its predecessor succeeded. The story is slower, the characters are dumber and of all things, the demonic entity is even assigned a motive.

In a huge series of missteps, the flick begins months before the events of the first film (which would technically file this entry as a “prequel” in my book) and centers around Katie’s sister, Kristi, who is just returning home from the hospital with her new born, Hunter. Kristi lives in an opulent home with her husband, Dan, and his teenage daughter, Ali. There’s a supposed break-in early on, which prompts the family to install security cameras throughout their house and a slow build of odd occurrences manifests shortly after. When Kristi brings up past episodes, Katie shrugs off the proverbial “things we do not speak of” and warns that even acknowledging them will only encourage more of the same. Everyone tucks their head firmly up their ass and all march blindly toward a conclusion that can only be unpleasant.

There were a lot of things I really admired about the first “Paranormal Activity”. While some would argue the validity of it’s originality (considering that the “Blair Witch Project” pioneered the home-video cam device a decade earlier – and it’s been used to death a hundred times since) what ultimately worked for me was the small scale on which the story was told.

And all of the most effective images basically taking place in a bedroom. 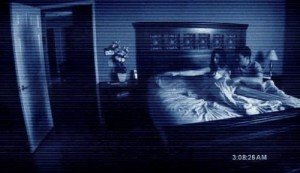 The first problem with “Paranormal Activity 2”, though, is that it immediately tries to open up the scope of the film with its characters. Aside from teenage daughter Ali (who seems to be the only one with any sense at all), we get a slew of poorly drawn clichés – A brooding, worried mother who ignores all of her better judgment; a spiritual, Latino nanny who can miraculously sense and disperse “the bad spirits” as the plot requires; and a dubious, idiotic father who won’t believe in ghosts until one is chasing him through his basement (cause, ya’ know, guys are apparently always resistant and close-minded when it comes to the existence of a demonic presence). Don’t even get me started on the dog.

That’s the thing; I don’t see the point of expanding the cast if you essentially just want to boil them down to stereotypes. For a movie that is supposed to be set in reality, no one really seems to behave the way you’d expect them to with these types of strange occurrences happening all around them (why bother to install security cameras in your house when you basically never intend on reviewing the footage?) One of the best things that the original film did was immediately set up the circumstances. Katie has been dealing with some form of haunting all of her life. Micah is skeptical, almost amused by it. They get in touch with a psychic who informs them that whatever is present is not, nor has ever been, human. It’s a demon; not specific to the house or even the town they live in, but something that will follow them wherever they go. There can be no escape. And even as aggravating as the Micah character can get, you at least understand that the reason he’s antagonizing the entity and resisting any form of help is because he’s basically just as scared as Katie and wants to feel some sense of control over what’s happening. 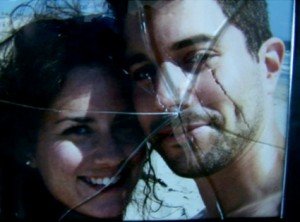 The static nature of the security cameras in this new installment only loses the state of immediacy that most of the original film’s hand held camerawork brought. I know everyone is sick of the whole shaky-cam-thing at this point; but for me, the few exciting sequences in the flick were ones that put me in the place of the actual characters (Ali peeking into Hunter’s room late in the film springs to mind, as does the one truly terrifying sequence that takes place in the basement). Though derivative of “.REC” and it’s “Quarantine” remake, that’s the stuff that actually had me spooked because I wasn’t sure what the hell I was about to see. Sure beats a stagnant shot of a levitating baby, which actually had the audience I saw the flick with laughing their heads off.

In retrospect, I think the biggest overarching problem that this flick had is that it handcuffed itself to the first movie. If “Paranormal Activity 2” had any chance of working, it needed to move onto a different paranormal entity and a better developed set of characters. Honestly, as much as I enjoyed their performances in the original, there was really no good reason to involve Micah and Katie in this film at all…and that ending is just absurd.

What started as an excellent exercise in effective independent horror filmmaking has spawned an unnecessary and unwelcome sequel. The first flick is a really good, low-budget ghost story; the sequel is a studio-polished cash-grab that we could’ve done without. I wouldn’t totally discourage you from ever seeing it, but unless you’re interested in what Katie’s second cousins twice removed are up to in “Paranormal Activity 3”, you might be better off just re-watching the far superior original.