A Pigeon Sat on a Branch Reflecting on Existence (2014)

Do you want to have fun? The two salesman that shuffle through Roy Andersson’s new film certainly intend to help, although a suitcase of pitifully poor novelty items might not do the trick. A Pigeon Sat on a Branch Reflecting on Existence (En duva satt på en gren och funderade på tillvaron) is an odd film. There’s certainly no other like it competing in the main competition at Venice this year. Then again, that’s been Roy Andersson’s approach throughout his career. He does his own thing, and wrapped up in an uproariously bittersweet trip through his grey pastel world he’s packed in enough astute observations on the very nature of life that you could watch a dozen times and still not have scratched the first layer.

The surface detail alone is intimidatingly impressive. Cast in undertaker grey, everyone appears on the verge of death in a dull pastel world. Each scene is a perfectly sculpted tableaux packed full of detail. Watch the attention grabbing action at the front and you’ll miss small movements hidden away in the corners. Focus there too long and the characters have moved on almost imperceptibly. The scene looks the same but there’s a telling alteration just waiting to be discovered.

Often, it’s achieved through the camera’s positioning. We rarely see the same shot twice in the central bar that hosts part of the action. Shifting side to side, the perspective is almost, but not quite the same. Like everyone in Andersson’s film, and everyone you’ll ever meet, the similarities bring everyone together before the subtle differences stand us apart. 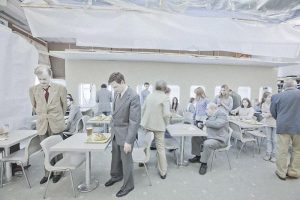 The two salesman, Jonathan (Holger Andersson) and Sam (Nils Westblom), appear most often. They trek around hawking vampire teeth, laughing bags and uncle one tooth masks. Their sales pitch is rehearsed and utterly without emotion. Guides of a sort, they stroll through families with money problems, fracturing couples, drunken bar patrons, singing soldiers and dying men. At one stage, they wander into a café that appears to be on the way to the Russian front for Charles XII’s 18th Century army. The King himself pops up, ordering the removal of all women from the establishment and the whipping of a man at the slot machines. On the defeated march back, he stops in again to use the toilet but it’s engaged.

A Pigeon Sat on a Branch Reflecting on Existence is that kind of film. Constantly funny and irreverent to a tee while still managing to highlight the brief span of human history and our close proximity to death. 300 years might seem like a long time but it really depends who you’re asking. A dying man might be a tragedy but he’s just as easily an opportunity to have a beer. Early on as the mood settles you might wonder what Roy Andersson is trying to say about life. By the end, the real question is what hasn’t he.