What happens when the only lifestyle you’ve ever known no longer offers much in the way of a life? Delivered through a series of gently rolling vignettes, The Postman’s White Nights (Belye nochi pochtalona Alekseya Tryapitsyna) is a heart-breaking lament for a dying community, and the individuals trapped within it.

Andrei Konchalovsky’s film settles into a natural rhythm immediately. Nothing is rushed, nothing forced. The setting is a remote Russian village consisting of little more than a few cabins by Kenozero lake. Superimposed text tells us the characters are played by real villagers. There’s a tired cynicism shared across them. Life continues but they all know the end is in sight. Nearly everyone is old. The young fled a long time ago destined for something more than camouflage clothing and a vodka problem.

Positioning cameras all over the village, Konchalovsky opens each day with a glimpse into several houses as the villagers awake to repeat the same cycle they’ve gone through a thousand times. This is part cinema, part reality TV. Our guide is Lyokha, the village postman played by the outstanding Aleksey Tryapitsyn. Each day, he takes his boat across the lake to pick up the mail from a nearby town. He also loads up with supplies for his neighbours. Returning, he does the rounds stopping in for a chat along the way. The process rarely alters. What they have to chat about so regularly is a mystery given how little happens. Then again, it’s all they have left to pass the time. 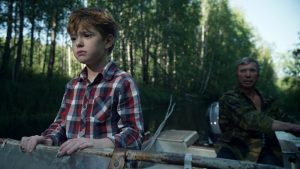 Two things happen that expose the chasm in his life. The first is a burgeoning friendship with Irina (Irina Ermolova) and her young son Timur (Timur Bondarenko). Lyokha lets him tag along acting the favourite uncle. It’s clear he desires more with Irina. It’s equally clear that’s never going to happen. She dismisses his clumsy come-on with a soft rebuke. Her eventual departure comes hard. Even harder is the theft of the motor for his boat. Suddenly he has nothing, unable to pick up the mail and do the one task that remains his.

As much as The Postman’s White Nights has a plot, it comes with Lyokha’s attempts to replace the motor and resume his routine. He’s forced away from the village to seek help from his sister and a friendly General who works out of a missile launch site. They have nothing to offer. The desperation this causes threatens to send him off the wagon he’s clung to so precariously for the past two years.

Lyokha and his companions are the last of a dying breed. Konchalovsky closes with two powerful images. Breaking up over the motor theft, Lyokha attempts to leave only to find himself drawn straight back. The relief on his face as he steps off the ferry is matched only by the grim realisation that he’ll never get out. Minutes later, a rocket taking off in the distance goes unnoticed. The world has moved on. Not everyone moves with it.